Does the world really need another tablet magazine? AOL sure thinks so. The company introduced its own spin on the concept this morning with the launch of Editions for the iPad.

Just like Rupert Murdoch’s much-ballyhooed Daily iPad magazine, Editions — available free on the App Store — delivers a single issue every day to users. But unlike The Daily’s pursuit of original content, AOL’s entry pulls stories from around the web to suit your interests. Basically, if the popular iPad app FlipBoard and The Daily had an unholy app child, it would be Editions.

“Our goal for Editions was to take the best of the online and offline reading experiences and fuse them into a single, sleek magazine unlike anything else that exists today,” AOL’s head of mobile, David Temkin, said in a statement today.

Indeed, Editions feels like a paper magazine, right down to the horoscope on every issue’s last page. But that may work in the app’s favor, especially with more mainstream users not used to the Sisyphean task of juggling constantly updating news readers and RSS feeds. The best thing about Editions is that you can actually finish it.

Here’s how it works: Upon first launching the app, it asks for your location (for weather and local news), and then has you log in to Facebook, Twitter, and AOL Instant Messenger. You’re then asked to choose from 15 topic suggestions, after which your first issue is compiled (a process that took my iPad 1 a few minutes). The compilation time was faster than it took me to download The Daily, which can get a little hefty since it also includes large pictures, video and other media.

After your first issue is ready, which will sit somewhere between 30 to 40 pages, you can schedule future issues to automatically be delivered every morning. Clicking into your first issue, you’re presented with a page that contains a live forecast, calendar (that syncs with Facebook and iCal), and the lead story. Beyond that, there’s a table of contents (no big surprises there), and then the app presents you with your selected story sections.

Stories are generally presented as short summaries that link back to their source sites. When looking at a story at its source, you can add and remove tags to personalize the content you want to appear, and you can also promote and reduce the amount of stories coming from particular sources. Editions allows you to read some feature stories entirely from within the app. And not surprisingly, you can share stories via e-mail, Twitter, and Facebook. 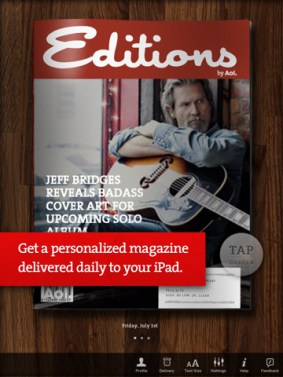 You can edit the sources of each section, and for sections like Technology and Business, you can also tell Editions to follow particular companies and products. Editions pulls its content from a variety of sources, but it doesn’t take any from your social networks like Flipboard does. That means you’re at AOL’s mercy when it comes to content sources. I was able to add VentureBeat as a source in the tech section, but the popular mobile site Boy Genius Report was nowhere to be found.

After using Editions for a few hours, my first impressions are generally positive. It’s a stylish app that offers some respite from information overload. Still, there are some stability issues. The app crashed several times during testing, and in doing so also lost my reading position.

Temkin tells me that they’re aware of the issue: “We are receiving reports of crashes under certain specific circumstances. We are investigating this now and hope to deliver a fix very soon,” he wrote in an email.

I asked Temkin if there was anything AOL didn’t have a chance to include in the first version of the app: “There are many, many things we’re considering for future releases, but we feel great about the feature set of the first release,” he wrote. “Too much complexity in an initial release is rarely a good idea; and we want to get actual user feedback before locking down our post-1.0 roadmap.”

He also says that AOL is keeping an eye on the Android tablet market, but for now the company is focusing on the iPad since it has the most users. “Our goal is to reach the largest possible audience, and we will go where the audience goes. As things stand, the tablet market is more or less equivalent to the iPad market,” he said.

Editions is just one aspect of AOL’s mobile strategy, as he told the audience at our MobileBeat conference last month. He said that AOL surpassed Microsoft last month as the No. 4 mobile destination venue, and pointed to the AOL Play app as the sort of mobile innovation the company is hoping to continue.