And what the data shows is that the top apps on Amazon are very, very different than Google Play.

All of Amazon’s top 10 paid apps are games, including three Disney titles: Where’s My Water and two versions of the super-popular Temple Run app (Oz and Brave). And while Mojang’s popular Minecraft game is near the top in both stores, the key difference is that Google Play’s top 10 selling apps include seven utilities, including Swiftkey Keyboard, the top-selling app in the U.S. 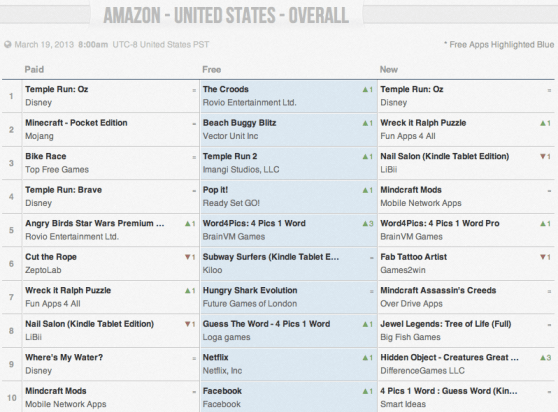 One of App Annie’s goals, of course, is to show developers where the big opportunities are. Based on the early returns, the main thing Amazon customers want from the company’s app store is games.

Analytics for the Amazon Appstore are important, since Amazon’s Kindle family is almost certainly the best-selling Android family of tablets in the world. Amazon doesn’t release Kindle sales statistics, but the Kindle Fire HD 7-inch dominates web use by Android devices, and ABI Research has calculated the total number of Kindle tablets in the market as of January as up to 12.5 million.