Downloads, revenue, and time spent in apps all grew by double digits during 2016, according to a report by market researcher App Annie.

Time spent in apps grew more than 20 percent to nearly 900 billion hours in 2016, according to the year-end report. That’s just one sign that the global app economy saw healthy growth during the past year.

In its year-end retrospective, App Annie said U.S. time spent in apps grew more than 25 percent. Worldwide, downloads increased 15 percent by more than 13 billion across both iOS and Google Play. 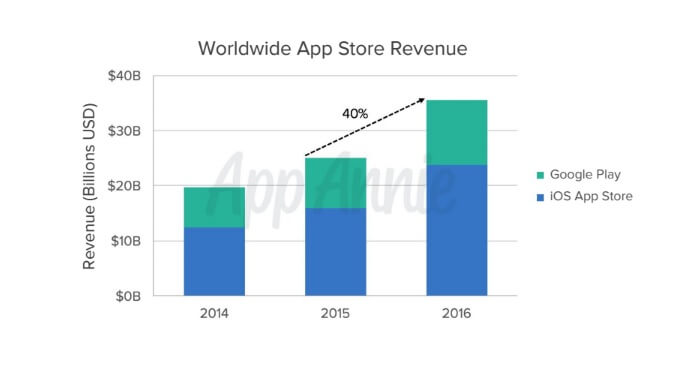 The $89 billion figure includes revenue paid to third-party app stores and advertising revenue. If you look at the revenue paid out to publishers by Google Play and iOS, the total is $35 billion worldwide. As with downloads, the increase in the iOS App Store’s revenue was largely driven by China, which contributed nearly half of the App Store’s annual growth.

During the year, India grew massively, surpassing the U.S. as the No. 1 country by Google Play downloads. India grew from more than 3.5 billion downloads in 2015 to more than 6 billion last year. The country’s smartphone penetration stands at only 30 percent, so there is a massive chance for more growth.

While mature markets experienced strong growth in 2016, emerging markets, including India, Indonesia, Mexico, and Brazil, saw even more impressive gains. The average number of apps used per month is about 30. 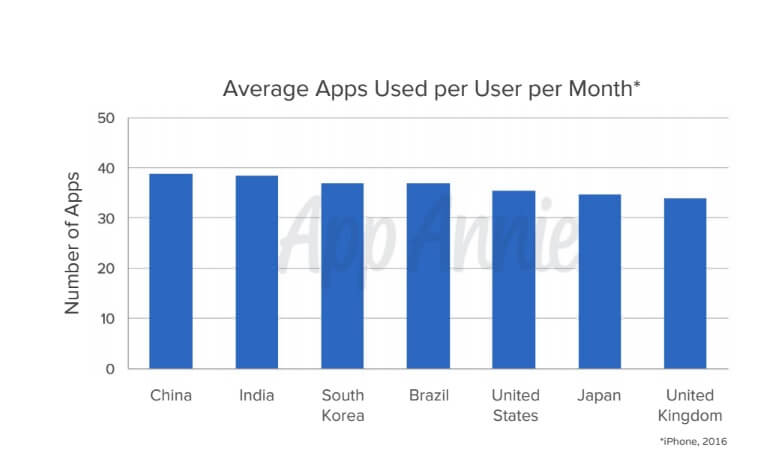 Above: Average number of apps used per month by country.

Apps are now disrupting legacy industries, such as banking, retail, and entertainment. And financial technology apps have grown in popularity, thanks to ease-of-use improvements in apps like PayPal, Venmo, and Credit Karma. Venmo’s monthly average users doubled from October 2015 to October 2016.

Video streaming went big time in 2016, with sizeable growth for YouTube and Netflix.

Shopping apps grew 30 percent in year-over-year revenue in the United States during the busy month of November.  France, Germany, and the United Kingdom experienced some of the highest growth rates in the number of sessions in shopping apps this past year.

Gaming also had a huge year, as gaming still accounts for 75 percent of overall revenue for apps on iOS and 90 percent of revenue on Google Play. Pokémon Go generated $950 million in revenue in 2016. And Pokémon Go attracted new users; it didn’t eat into the usage or revenue of other games.

In other findings, App Annie said that Black Friday was the first day to ever generate over $1 billion in U.S. online mobile sales. The average American iPhone user now has over three shopping apps installed.

Lastly, App Annie said that average revenue per user (ARPU) has been increasing significantly. Japan stood out, as the top 30 games in Japan monetized over twice as effectively as the top 30 in the U.S. This was almost entirely driven by the Role Playing Games (RPG) subcategory, which accounted for roughly two-thirds of Japan’s top 30 games by revenue.

While Japan maintained its overall ARPU lead, China stood out in  terms of growth, increasing nearly 10 times since 2014. As with Japan, RPGs were the driving force in China. However, a deeper look revealed that a specific type of RPG, massively multiplayer online RPGs (MMORPGs), was especially important. 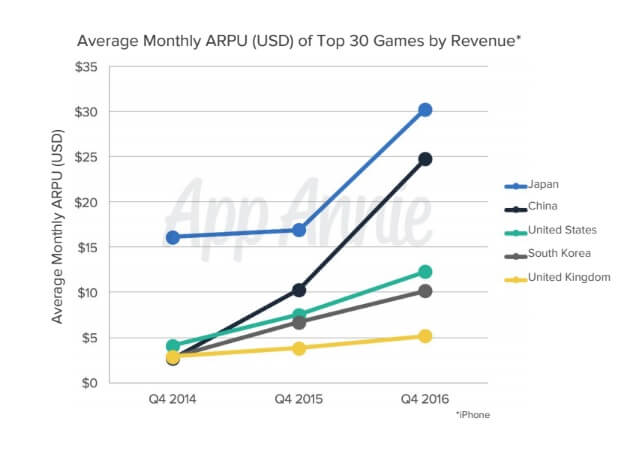 Above: Average revenue per user is rising in games in a variety of territories.