Less than a year after getting Eurasian Economic Commission approvals for two new tablets later revealed to be the Wi-Fi and Wi-Fi + Cellular models of the sixth-generation iPad, Apple has again received EEC registrations for new tablets. This time, the registrations cover a collection of six models, suggesting that a major refresh is coming soon to the iPad lineup.

Originally discovered by MySmartPrice (via MacRumors), the registrations cover models A2123, A2124, A2152, A2153, A2133, and A2154. The database shows each as an Apple tablet running iOS 12, with a January 23 registration date and January 25 publication date. Last year’s two iOS 11 tablets were disclosed by the ECC on February 19, and unveiled at an education-focused Apple event on March 27.

While the model numbers alone don’t necessarily mean anything — last year’s Wi-Fi and Cellular models bore widely separated A1893 and A1954 numbers — the list appears to correspond with three clusters of Wi-Fi and Cellular models, two sequential, plus A2133 and A2154 grouped together in one filing. If all of the models are released simultaneously, that would represent a fairly significant expansion of the iPad line, which plateaued in sales some time ago. 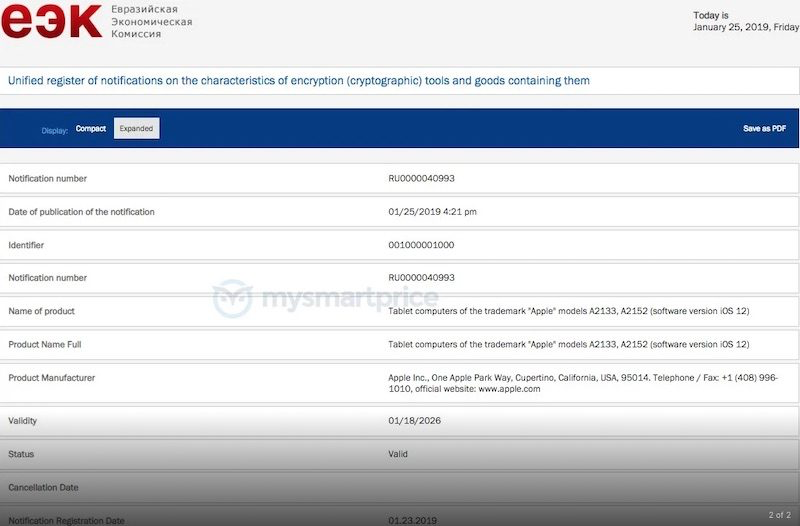 Apple has annually refreshed its entry-level iPad with new A-series processors at March events in 2017 and 2018, increasing the likelihood of another such refresh in early 2019 — potentially with a slightly larger screen. Rumors have also circulated that Apple is readying a small tablet to replace the aging iPad mini 4, and that both the iPad mini 5 and entry-level iPad 7 will arrive in the first half of this year.

As to the third iPad, another model — the 10.5-inch iPad Pro — unexpectedly stuck around for last holiday season, which could signal its replacement at an early 2019 event. There’s also the outside possibility of a significantly smaller iPad Pro that brings Apple’s most recent industrial design and features to an iPad mini-like footprint.

The last iPads released were the 11-inch iPad Pro and 12.9-inch iPad Pro, debuted last October and sold in November. Since Apple typically doesn’t replace iPads until a year or more after their initial release, these higher-end models are unlikely to be updated until much later in 2019.

It remains to be seen whether Apple will significantly up the iPad ante with any of these new models. The last two 9.7-inch iPad updates have offered little more than processor and accessory support bumps inside a familiar chassis, and the iPad mini 4 has sat unchanged since September 2015. It’s likely that the company will bring the A12 Bionic processor to at least some of the models, and possibly transition the tablets to USB-C with magnetic Apple Pencil 2 support following similar changes to the iPad Pro last year.