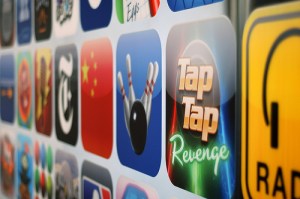 Thanks to the iPhone 4S’ huge sales, Apple’s mega-popular iOS App Store reached an all-time high in November for free downloads coming from the Top 200 apps, according to marketing firm Fiksu.

In retrospect, it’s not terribly surprising when you consider that the iPhone 4S had the most successful iPhone launch ever, with more than four million units sold in its first weekend in October. All those first-time iPhone owners, and repeat owners who upgraded to the 4S, decided to download a ton of free apps.

Fiksu specifically said the App Store Top 200 had an average of 5.65 million free downloads per day in November, which is the first time they’ve seen that number go above 5 million. In October, the App Store Top 200 had 4.91 million free app downloads per day. Before the iPhone 4S launch, the app download count had actually been decreasing, most likely because there were fewer people buying new iPhones, and current iPhone owners had curated a well-rounded app collection.

Another huge factor that contributed to the all-time high download count was the launch of the iOS 5 mobile operating system. With a lot of iPhone 3GS and iPhone 4 owners upgrading to iOS 5, many apps needed to be upgraded or re-downloaded to function properly with the updated OS.

Fiksu expects the App Store will continue to flourish because of strong iPhone 4S sales. Several analysts are predicting more than 30 million iPhone 4S units will be sold before the end of December. Those analysts predict that record number because of super-strong web buzz and earlier strong sales reports from carriers.

A full look at the Fiksu’s app Top 200 download chart can be viewed below: