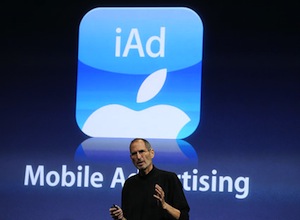 Quattro Wireless, the ad network acquired by Apple earlier this year, announced today that it’s winding down its existence as an independent network to focus on Apple’s iAd program.

Apple chief executive Steve Jobs has said he doesn’t see advertising as a big moneymaker for Apple on its own, but rather as a way to support the iPhone and iPad:

We want to help our developers make some money so that they can keep providing free or really low-cost apps to customers. That’s why we’re doing it. We’re not going to make much money in the ad business.

So from that perspective, the move isn’t too surprising. Quattro’s value to Apple is as an enabler for iAds, not as a standalone network.

Business Insider broke the news after receiving a copy of a letter that Quattro sent to network participants. The company has posted a similar note on its website. It says, in part:

We believe iAd is the best mobile ad network in the world, and starting next month we’re going to focus all of our resources on the iAd advertising platform. We are no longer accepting new campaigns for the Quattro Wireless Network, and we will soon begin winding down existing campaigns. As of September 30, we will support ads exclusively for the iAd Network.

Meanwhile, the iAd program is underway, but there are rumors that some advertisers are unhappy that the process is so slow. In fact, a competing ad network, Greystripe, is trying to capitalize on the delays by promising a five-day turnaround for rich media ads, compared to a rumored eight to 10 weeks for iAds.

And it looks like other phone makers want to follow Apple’s lead into advertising. BlackBerry-maker Research in Motion is shopping for a network, and has held talks with Millenial Media, according to the Wall Street Journal. (Google also purchased mobile ad network AdMob. But the model is different for Google since revenue comes from ads, not from the sale of devices using its Android operating system.)

Update: I spoke to Paran Johar, chief marketing officer at ad network Jumptap, about the news. Johar said the move has likely been in the works for a while, and that Quattro’s wind-down has contributed to a growth in advertising on Jumptap. The Apple iAd focus on premium advertising was always going to conflict with Quattro’s lower-end network.

“You can’t have a go-to-market strategy with … a $1 million minimum [in campaign spending] and also be selling ads out of the back of your van,” Johar said.

Quattro’s decision to drop support for major audience segments on non-Apple platforms is ultimately bad for their advertisers and developers. Advertisers care about audiences, reach and user engagement, not specific platforms. As the Android audience catches up to iPhone and Blackberry continues to improve the potential for user engagement, these smartphone platforms will become increasingly important for advertisers. Greystripe, as an independent mobile ad network, is committed to the needs of advertisers, enabling them to engage their target audience on all major mobile platforms.