Apple’s annual operating system cadence has guaranteed a steady stream of June betas and September final releases for years of WWDCs, so it’s no surprise that the company is today announcing iOS 13, the latest major version of its core software for mobile devices. The new release promises dramatic performance improvements under the hood, improving Face ID recognition times by 30%, reducing app sizes, and introducing Dark Mode.

But there is a surprise: Starting today, iOS 13 will be for iPhones and iPod touches, while a separately tailored version for iPads will be known as iPadOS. If the new iPadOS name strikes you as unusual, bear in mind that iOS’s original name, iPhone OS, lasted through mid-2010, even as the original iPad was getting started. Apple switched it to “iOS” in June 2010 to acknowledge that the same software was running on iPhones, iPods, and iPads.

There are numerous small changes, such as Time-Synced Lyrics in Music, a new QuickPath keyboard supporting swipes as well as taps, and rich text composition in Mail. Apple is also adding significant privacy features, including an “allow just once” sharing of locations for an app, Wi-Fi/Bluetooth protections, and a tracking-free Apple Sign In option — complete with the option of automatically generated forwarding email addresses, which are separately issued for individual apps and can be turned on or off as necessary. 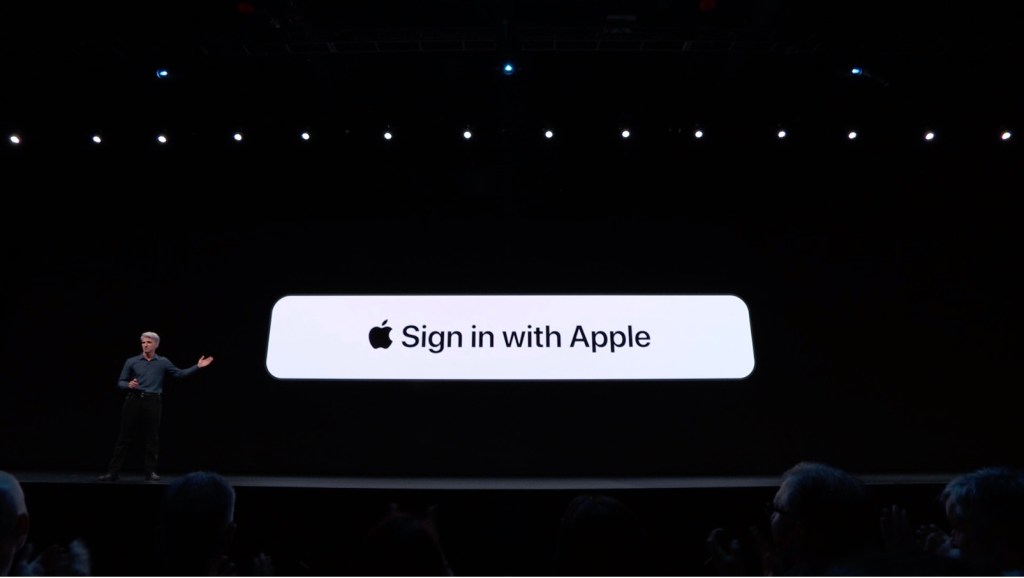 The Reminders app, which previously occupied its full main screen with one of multiple (and possibly empty) to-do lists, will make better use of the screen by segmenting it into today’s tasks, scheduled tasks, flagged tasks, and all tasks, then letting users drill down into each screen to add more items. Smart lists and deeper links are being added to the app, as well.

In addition to Apple’s ongoing improvements to its own maps’ details, expected to appear across the United States by the end of 2019, the Apple Maps app is also receiving a series of quality-of-life improvements designed to make navigation easier. The new launch screen features a simplified interface for flagging key or frequently visited destinations, and creating groups of locations like “favorite restaurants.” Apple is also offering its own version of Google’s Street View called Lookaround, which smoothly transitions between 2D photos of scenes using 3D previews. 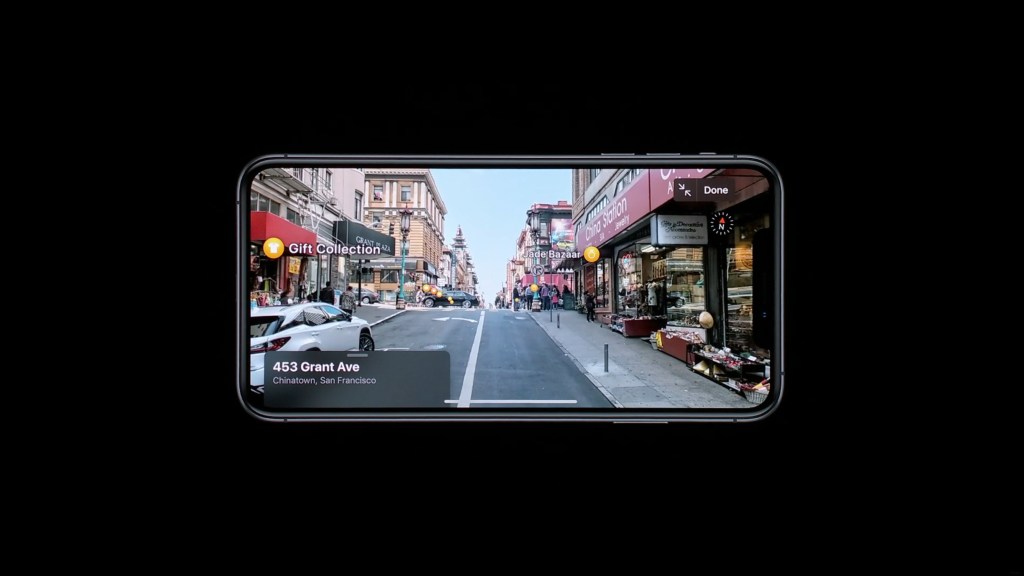 Apple’s Health app is receiving a refresh, including a new version of the main Today page that better emphasizes daily activity — previously a small sliver of multiple colored bars below a week-long calendar at the top of the screen. Health is improving support for menstrual cycle tracking and adding hearing health measures, including information on environmental noise and the volume of headphones.

Messages, Apple’s unified app for text, audio, photo, video, and AR messaging, is making a major change this year with the option to associate a display name and photo with your phone number and email address, plus controls over who will see those details. 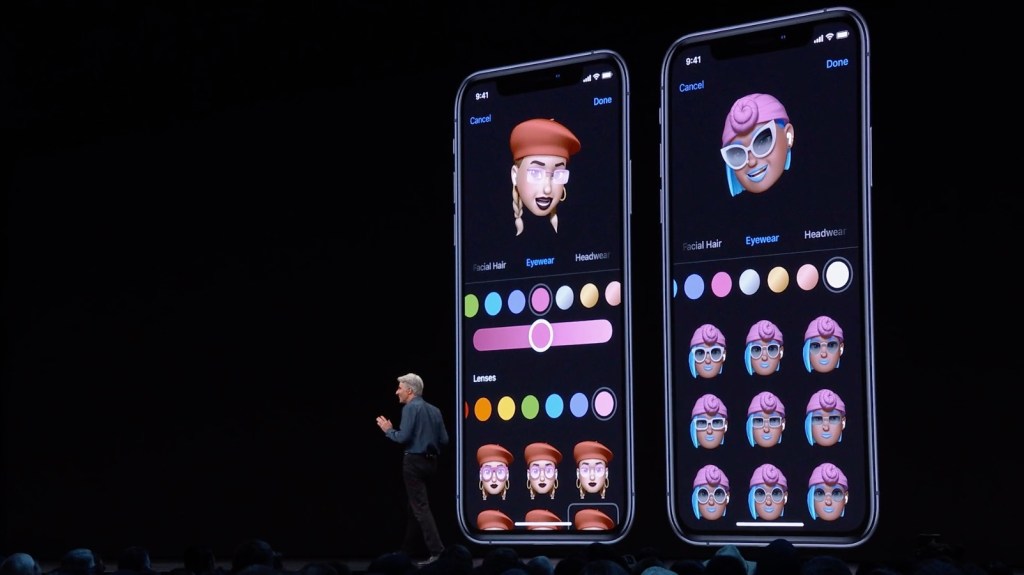 Also, Animojis and more detailed versions of Memojis, cartoony AR representations of emoji characters and people, can now be easily shared as one-frame stickers rather than data-eating videos. Instant stickers are created for your use, not only in Messages but also in other apps. And users can create Memoji stickers using all A9 chip or later iOS 13 devices. 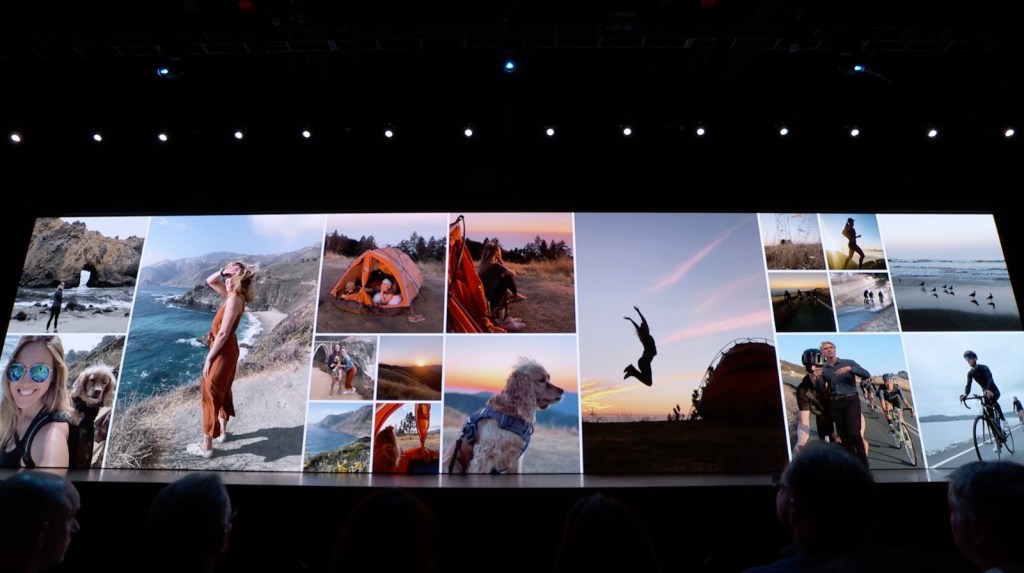 Camera’s Portrait Lighting feature is being updated with a High-Key Mono effect and facial smoothing options, while the Photo app’s editing is adding vibrance, white balance, sharpen, definition, vignette, and noise reduction adjustments — as well as the ability to apply filters and effects to videos, not just photographs. The new Photos app will use ML to reduce duplicates within your library, and create a better Days view tab that presents images in a deliberately uneven grid that emphasizes some images over others.

On the Siri and AirPods front, iOS 13 is also enabling AirPods to instantly convey new incoming text messages, and allow you to respond to them. Users will be able to use device proximity to instantly share songs they’re listening to, including Handoff of a currently playing song from an iPhone to a HomePod. And HomePod will be able to recognize different users’ voices, customizing responses to each of them.

CarPlay in iOS 13 is getting a dashboard with redesigned calendar, music apps, and a persistent Siri bar that works with third-party apps including Pandora and Waze. Siri Shortcuts is now built directly into iOS 13 rather than separately downloaded, and arrives with “suggested automations” so you can get started quickly. A new update to Siri’s voice using neural text to speech is entirely generated by software rather than using tiny clips of human voices.

While all of the above mobile OS improvements will be shared across iOS devices, several are specific to iPadOS. There’s a new home screen design, updating the classic grid and dock that have remained virtually unaltered since the first iPad debuted in 2010. The new home screen lets you see the grid alone, or add widgets to the left side of the screen. 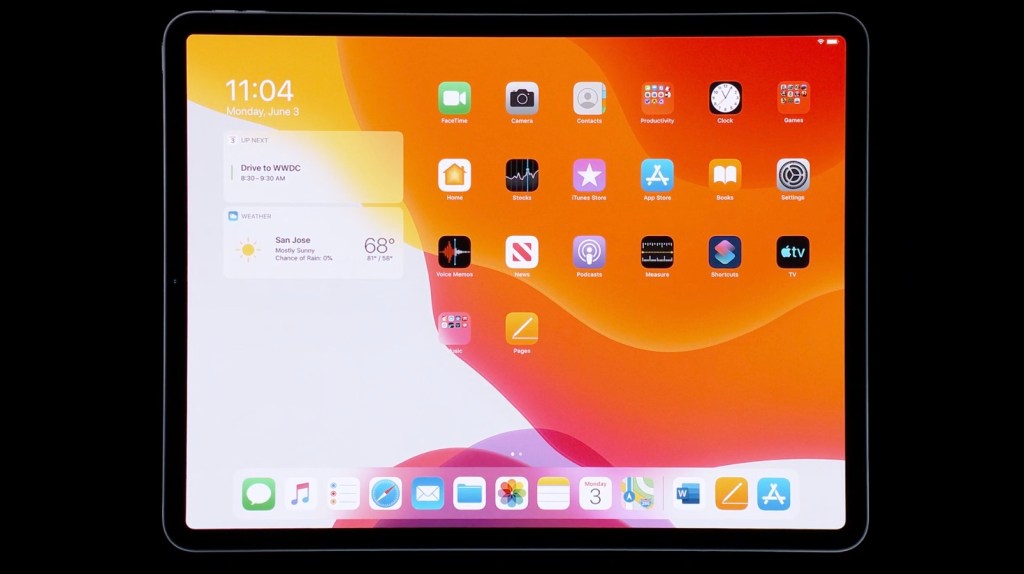 iPadOS also includes an improved multitasking interface, building on Split View mode with the ability to flip through apps within the Split View bar, open multiple instances of the same app, and show App Expose on the iPad — you can see all open apps on the screen at once. The iPad will also gain the ability to function as a second screen for a Mac — complete with cursor-style input via an Apple Pencil.

The Files app is adding Column view, a Mac-like way to dig through lists of files, including file previews and metadata. SMB file sharing and iCloud Drive folder sharing have been added, as has support for plugging in and reading thumb drives, external disk drives, and SD cards. Direct importation into individual apps such as Lightroom, plus archive zipping and unzipping, has also been added.

Safari on iPad is getting a desktop-class browsing mode, with desktop sites, Google Docs, and other key web apps getting full automatic touch support on the iPad. Additional quality of life UI improvements are being made across iPadOS as well: Custom fonts will be available from all the major font providers, the cursor selection tool is being made simpler — just point — and three-finger swipes to the left and right will be used for cutting and pasting across multiple apps. 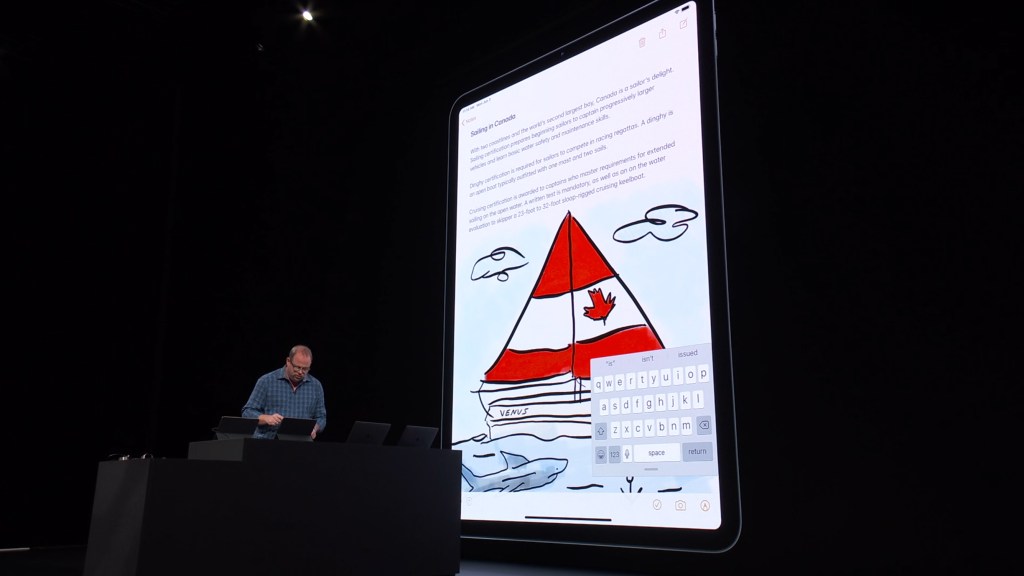 Latency on the Apple Pencil is being dropped from 20ms down to 9ms through optimizations, and third-party apps will be able to use a new PencilKit API to add markup and drawing tools to their apps — with the ability to move and pin that collection of tools to the sides or bottom of the screen. A new floating iPhone-style mini keyboard will become available to use on larger full-screen displays, so iPad users needn’t give up the entire bottom of the screen for a large keyboard anymore.