Last week, independent repair shop iFixit discovered that iPhones have started to warn users when their replacement batteries haven’t been authenticated by Apple or its authorized service technicians — a little nag that was hidden in iOS 12 and iOS 13, but only recently turned on. Now Apple is defending the practice by claiming that it’s a safety feature, intended to protect customers from improper repairs and unauthorized parts.

An Apple spokesperson suggests that the feature was originally “introduced” last year, and is being displayed now because Apple recently expanded its authorized service network to 1,800 providers across the United States by adding every Best Buy store to the list. As such, four-fifths of Apple customers are now within 20 minutes of an authorized service provider, enabling the company to assert that the vast majority of U.S. iPhone users can and should seek authorized repairs when their batteries degrade or fail.

For iFixit and other independent repair shops, however, the issue isn’t just the loss of business, but the broad brush Apple is using to paint “unauthorized” battery repairs as potentially unsafe — and the way it’s being portrayed as an established practice, when it was only recently turned on. According to Apple’s statement:

Last year we introduced a new feature to notify customers if we were unable to verify that a new, genuine battery was installed by a certified technician following Apple repair processes. This information is there to help protect our customers from damaged, poor quality, or used batteries which can lead to safety or performance issues. This notification does not impact the customer’s ability to use the phone after an unauthorized repair.

While Apple determines the standards and parts used by authorized repair shops, that’s not to say that all or even most “unauthorized” shops stick users with used, damaged, or bad battery packs. Yet unless the iPhone’s battery is specifically checked in with Apple, the iOS-level notification suggests that the battery replacement hasn’t been done properly. 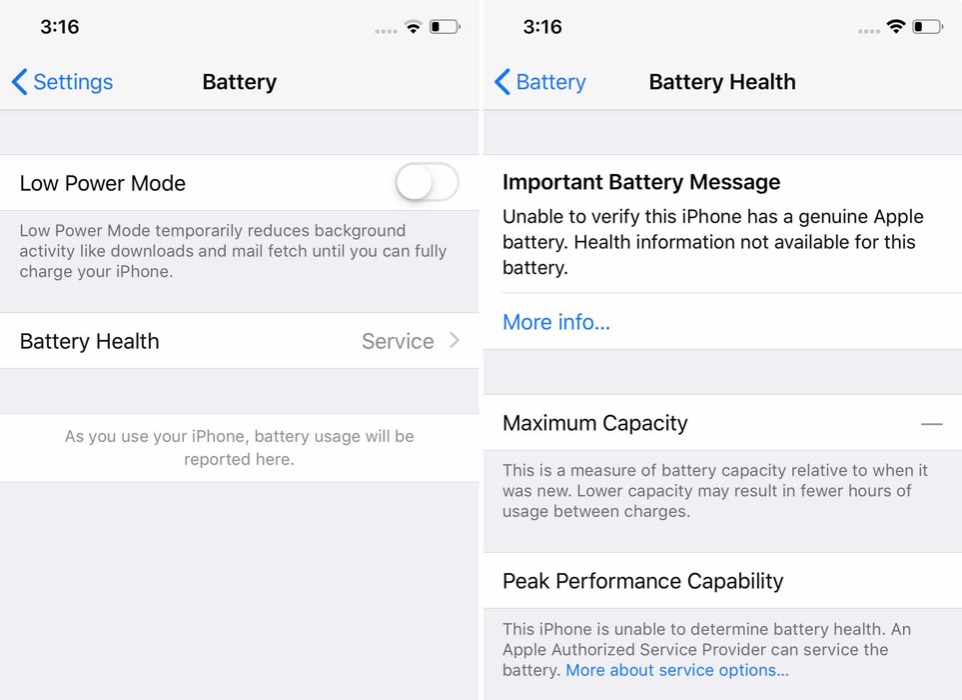 On the iPhone XR, XS, and XS Max, a “Service” message appears under Battery Health, which if tapped explains that iOS is “unable to verify this iPhone has a genuine battery.” Apple disables the device’s Battery Health feature as a result, removing a capability it promised to users back in iOS 11.3 early in 2018.

Batteries, even “genuine” Apple ones, have been a major source of headaches for both the company and its customers over the past couple of years. Apple spent much of 2018 dealing with a self-inflicted disaster caused by its quiet performance throttling of iPhones with aging batteries, ultimately offering discounted battery replacements to placate angry customers and regulators. More recently, it has instituted a recall program for certain MacBook Pro laptops, which could spontaneously combust due to expansion of their battery packs.