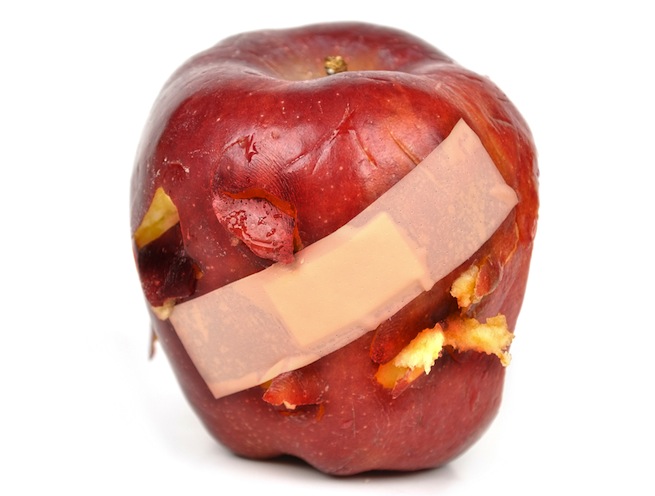 You just updated an app and it’s crashing. Don’t yell at the developer, it’s an issue with Apple. The company is distributing a number of corrupt updates to users, forcing them to delete and re-download apps when a fix is issued. (Update: Apple has offered a statement about the issue, see the bottom of this post.)

The problem may stem from an issue in Apple’s app distribution server, as observed by Instapaper’s Marco Arment, GoodReader for iPad, and the Readdle Scanner Pro team. Globally, App Store users who updated apps within the last day or so are having apps crash when opened. The problem here isn’t just the fact that users are being served corrupt applications, but that those users are now turning to the developers and leaving angry e-mails and one-star reviews.

Arment explains that the corrupt apps fade to black before shutting down completely and returning users to the iOS Springboard. Those updating from iTunes may see error messages. And if you updated a Mac app, you may see an error message that reads, “[App name] is damaged and can’t be opened. Delete [App name] and download it again from the App Store.”

Developers are only now beginning to say they’ve heard back from Apple, according to TechCrunch. The statement from Apple reads: “We are aware of the issue related to apps crashing after update. We are currently working on resolving the issue. Stay tuned for updates.”

“Frankly I’m not sure we might receive an update from them. I would say the best they could do is to quietly fix everything and then pretend everything will be fine,” said Zhadanov in an interview with VentureBeat. “This is the way Apple handles most problems until it gets really loud in the press. They don’t spend time doing some sort of explanation.”

Apple has seemingly been very quiet throughout this issue, which has been ongoing for over 24-hours. A company that reaches this many people, and has effectively spurred job growth in the developer community, should inform its users of errors and issues — even if only privately to individual developers who reach out. And while Apple has begun that process, Zhadanov isn’t surprised at how much time has lapsed.

Arment notes that he contacted App Review shortly after the Instapaper update was released, but wasn’t contacted. Two hours later, a functional Instapaper was being distributed in the App Store, but only for re-installs. Meaning, the only way to restore your Instapaper app was to delete it and re-download.

Arment is keeping a list of apps having the same issue. Thus far his list totals 100. Those include Angry Birds Space (both free and HD free), Dolphin HS Browser, Pair, LA Times, and Yahoo Search. The entire brand of Angry Birds has over one billion downloads. We don’t know what percentage of that belongs to Angry Birds in Space, but it’s safe to assume that millions of users could have been affected by that corrupt update alone.

The issue also says something about the pitfalls of a centralized App Store. That is, if you’re unable to download an app to your phone from anywhere but a supplied market, any issues with that market are bound to be widespread and unavoidable.

“There’s a mix of pros and cons here. On one side, the tight control of the ecosystem is really good. It builds a level of trust from the user point of view,” said Zhadanov. On the other hand, “We don’t have any good way to communicate with these users… the end users and the developers are separated from each other.”

As TechCrunch notes, Zhadanov believes it may be a problem with FairPlay, Apple’s digital rights management system. He speculates that a flaw in the DRM causes it to fail digital rights validation and shuts down the app. Apple is still the only one with the answers right now.

Update: Late Thursday night, Apple offered up the following statement on the issue to The Loop, as well as several other sites:

We had a temporary issue that began yesterday with a server that generated DRM code for some apps being downloaded, it affected a small number of users. The issue has been rectified and we don’t expect it to occur again. Users who experienced an issue launching an app caused by this server bug can delete the affected app and re-download it.