Ahead of Earth Day, Apple has today announced a series of improvements to its recycling initiatives, including an expansion of its Apple Store device recycling program to include select third-party retailers. The company also announced that it has opened a Material Recovery Lab in Texas for the specific purpose of developing future recycling processes for its products.

Apple’s expansion of its previously named GiveBack trade-in initiative adds U.S. Best Buy locations and KPN retail stores in the Netherlands, a move that quadruples the number of receiving locations. Coinciding with the expansion, Apple has rebranded the oddly named service to the more logical Apple Trade In, which puts greater emphasis on the customer’s recovery of value from the program.

Condition and age determine whether the devices are refurbished or recycled. Apple says it has started to recycle the aluminum from Trade In devices to create MacBook Air enclosures, and it is also using recycled aluminum in the latest Mac mini, with 100% recycled tin used across 11 different device logic boards.

The company says it has already received nearly 1 million devices — enough to keep its Daisy recycling robot busy for almost a year. Each Daisy can now disassemble 15 different iPhones at a rate of 200 per hour, or 1.2 million iPhones per year. In 2018 alone, Apple says it refurbished over 7.8 iPhones, helping keep over 48,000 metric tons of waste from hitting landfills.

To support its recycling efforts, Apple’s new Material Recovery Lab occupies 9,000 square feet of space in Austin, Texas, with plans to use machine learning and robotics to automate device disassembly, sorting, and shredding, The company expects to collaborate with academics to develop solutions to industry-wide recycling problems. 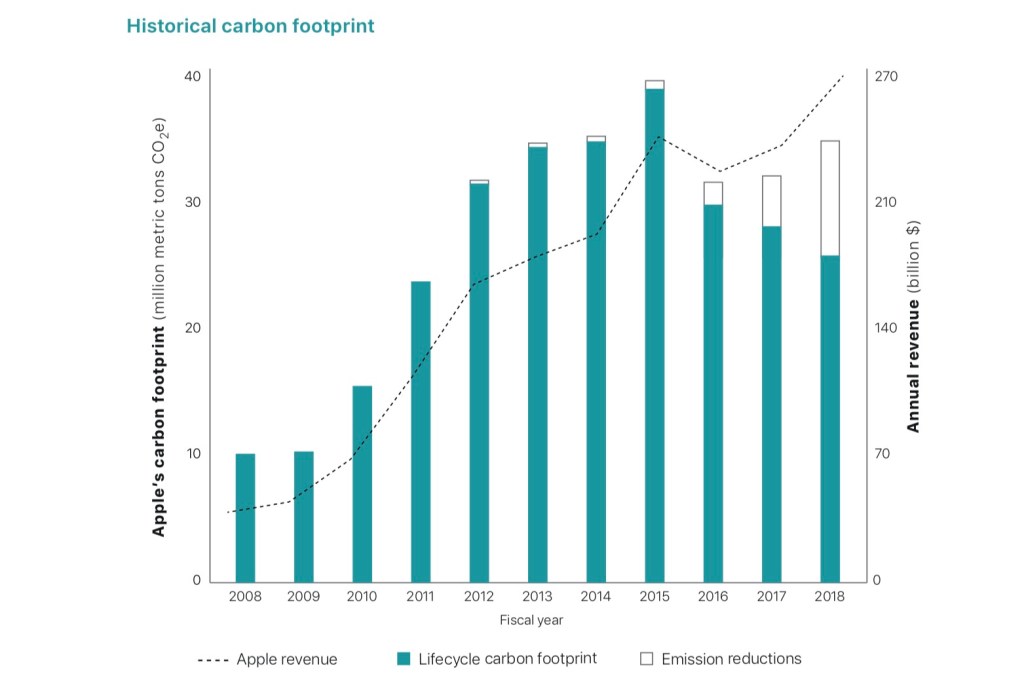 Apple also released its latest environmental progress report, which is labeled 2019 but covers 2018 initiatives. While the report shows relatively small statistical changes during the past year, the overall multi-year trend is improvement, even as sales have continued to grow.

The company recently said it had cajoled all of its major contract manufacturers to use 100% renewable energy, and the report notes that Apple modestly reduced its carbon footprint in 2018 — down around 2 metric tons to 25.2 metric tons across all operations. In the last year it also reduced aluminum-related emissions by 45% while transitioning suppliers to “safer cleaners and degreasers,” amongst other production improvements.