The device is possibly Apple’s most serious shot at the enterprise to date. Apple would love to sell thousands of tablets at a time to whole departments, rather than selling them one by one as usual.

Looking at the hardware alone, the iPad Pro looks like a larger version of the iPad Air 2.

The new device’s screen has 5.6 million pixels. Apple says the graphics quality in the iPad Pro is 360 times greater than that in the original iPad.

“This is the most advanced display that we have ever built,” said Apple’s Phil Schiller.

The iPad Pro weighs 1.57 lbs. The device also has a 4-speaker audio system, the first time in an Apple product.

Apple also announced a new smart keyboard accessory for the new device. It attaches to the iPad using three magnetic circles on the side of the iPad Pro for voice and data. It will sell for $169. 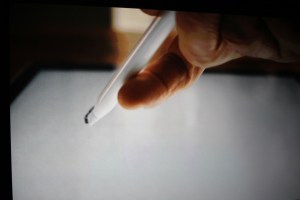 Apple also announced a new Apple Pencil stylus that can be used to write or draw on the iPad Pro. The user can press harder to increase the thickness of the mark, and softer for thinner marks. A Lightning connector on the end of the Pencil plugs directly into the iPad to charge.

The new Apple Pencil sells for $99.

It runs iOS 9, which offers the ability to run two apps at a time in split-screen mode — a key feature for workplace use. A Thunderbolt port provides for power and data.

An NFC chip is included, so the iPad Pro can serve as a payment terminal and accept contactless payments.

Microsoft took the stage here at Apple’s event to talk about how the Microsoft suite of productivity products, like Word and Excel, will work with the new iPad Pro. Microsoft’s VP of Office products Kirk Koenigsbauer demonstrated how the iPad, with the new pen, can be used to create elements such as charts and graphs in Microsoft documents.

Adobe also took the stage here to talk about how Photoshop works on the new iPad Pro. Adobe’s Eric Snowden demonstrated design functions that are optimized for the new iPad. A facial recognition function in Adobe Comp can identify and modify specific facial features, like lips, quickly. In the water-painting feature in Photoshop, the Apple Pencil can be angled against the screen to control the mixture of water and pigment in the illustration.