Apple products, not cloud computing, will be the real force behind computer equipment sales in 2012, according to a report by analyst firm Forrester.

“Analysts have been predicting that cloud computing — specifically, infrastructure-as a service (IaaS) — will reshape the server and storage market,” the report read, “Actual adoption of IaaS remains limited.”

Meanwhile, there’s another trend that’s picking up: People are increasingly bringing their own devices to work, and those devices are frequently Apple products, since Apple is known globally for making products that are easy to use, easy to set up and that quickly proliferate to the masses. The “bring your own device” culture that began infiltrating the workplace in 2011 will mean companies will have to make technology plans around Apple, as opposed to the “less pressing” IaaS.

Cloud computing is a big switch that IT managers are dealing with. It’s new, it’s shiny, but it also means huge change, which causes doubts. In the second fiscal quarter of 2011, Forrester surveyed a number of companies and discovered that 14 percent had plans to introduce IaaS into the company structure. Only 3 percent said they were implementing these plans in 2011. Forrester believes the global economy will put a bigger strain on chief information officers’ budgets in 2012, however. Thus, early worries about spending money on new equipment supporting IaaS, will cause CIOs to cut these purchases out of the budget.

Forrester estimates that in 2011, Apple sold $6 billion in Macs as well as the same number of iPads to businesses, despite the fact that Apple does not target the corporate market. The iPad in particular is an easy-to -use technology that is less of an investment than a suite of Mac computers. This may be appealing to CIOs, and it show in Forrester’s 2012 and 2013 predictions. 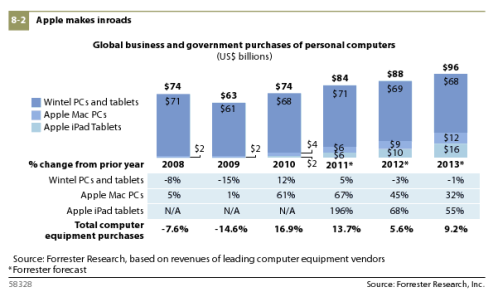 In a recession, CIOs will turn toward easy, simple solutions, and thus Apple is the likely winner. IaaS may still play a big roll in shaping what the future of equipment may look like, but for now the iPad is still the executive’s favorite work toy.