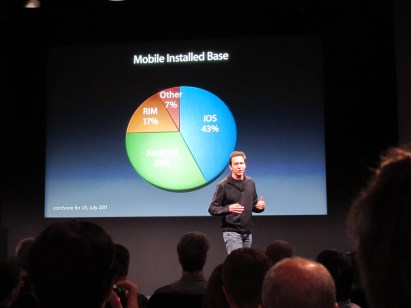 Over a quarter-billion iOS devices, such as iPhones and iPads, have been sold by Apple, CEO Tim Cook revealed on stage today at the company’s press event.

Additionally, Cook said that Apple has sold over 18 billion apps, with 1 billion apps being downloaded every month.

The numbers show that iOS’s growth is continuing to skyrocket, even though the iPhone accounts for just 5 percent of the worldwide mobile phone market.

When it comes to mobile browsing usage, though, the iPhone leads with 61 percent. Android accounts for just 31 percent.

Yearly growth for the iPhone is also strong at 125 percent, compared to around 74 percent for other smartphones. “This momentum isn’t in just one type of market,” Cook said. “93% of Fortune 500 companies are testing or deploying the iPhone.”