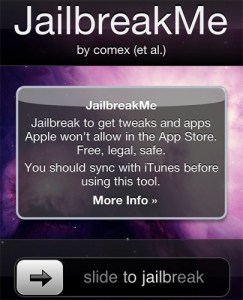 The notorious iPhone jailbreak hacker Comex has been snapped up by Apple as an intern, he announced on his Twitter account last night.

Comex, who was outed by Forbes as Nicholas Allegra, has gained a reputation as someone who can find obscure security holes in Apple’s iOS software. Last summer, he and his team made jailbreaking the iPhone as simple as visiting the website Jailbreak.me.

“It’s been really, really fun, but it’s also been a while and I’ve been getting bored… So, the week after next I will be starting an internship with Apple,” Comex wrote on Twitter.

According to the Forbes report, Allegra has been looking for an internship since leaving Brown University last year. It’s a smart move by Apple to offer him a job, albeit a lowly internship, since it means he’ll be using his talents to make iOS more secure. And by working for Apple, Allegra likely won’t continue his hacking work.