Ahead of Earth Day and the release of its annual environmental report, Apple announced today that it has developed Daisy, a second-generation iPhone recycling robot capable of turning three iPhones per minute into sorted piles of parts. Rather than just leaving old devices intact, the machine enables Apple to reclaim “precious materials” — a process originally handled by a less capable robot, Liam, disclosed by the company in 2016.

Made with some of Liam’s parts, Daisy is capable of disassembling nine different iPhone versions, where Liam was only able to handle a single model. Daisy is able to disassemble up to 200 iPhones each hour, which is around one-third slower than Liam, but handles a wider variety of devices and parts. 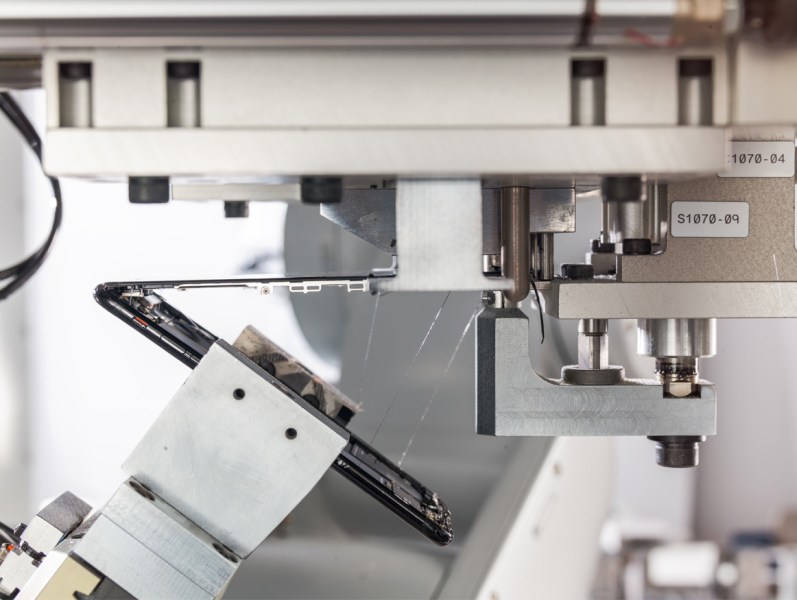 Photos show Daisy handling iPhone 6 and iPhone 6 Plus models, as well as smaller iPhone 5 and iPhone SE devices; Apple says the robot is also capable of processing the iPhone 5s, iPhone 6s, iPhone 6s Plus, iPhone 7, and iPhone 7 Plus. Glass, adhesive, and screws can be quickly removed from the iPhones’ housings, leaving Touch ID sensors, metal, audio parts, and circuitry intact, while keeping humans safe from old and potentially dangerous batteries. Apple notes that the robot “can recover materials that traditional recyclers can’t — and at a higher quality.”

A white paper on Liam noted that it was able to separate out the iPhone 6’s cover glass assembly, battery, main logic board, receiver, speaker, alert module, rear-facing camera, and housing — eight pieces — and worked on lines of 29 robots, disassembling up to 1.2 million iPhones per year. Apple later said that it was able to process up to 2.4 million iPhones, suggesting that it was running two Liam lines. The company has not yet provided statistics on Daisy’s run rate.

From today through April 30, the company announced, Apple will make a donation to the nonprofit Conservation International for every device received at Apple Stores and Apple.com through its Apple GiveBack program, a new marketing name for its combined recycling and trade-in initiative. The donations will be in addition to the credits Apple offers to users to apply toward purchases from its retail and online stores.

Apple also released its annual environmental report, this time covering the year 2017. According to the report, Apple’s goal is to reach a “closed-loop” supply chain where all of the company’s products are made using recycled or renewable materials, and where Apple returns an equivalent amount of material back to the market as what it uses. In granular details, the company notes that it has reduced everything from the quantities of material used in its products and packaging to the consumption of energy by its devices.

On the big-picture front, Apple has reduced its “overall carbon footprint to 27.5 million metric tons of greenhouse gases … down from 29.5 million metric tons in 2016.” Additionally, at its Apple Park campus, the company “added 700 new electric vehicle charging ports, more than 2000 new campus bicycles, and a dedicated transit center,” just a handful of its initiatives to reduce dependence on fossil fuels. The full report is available here.