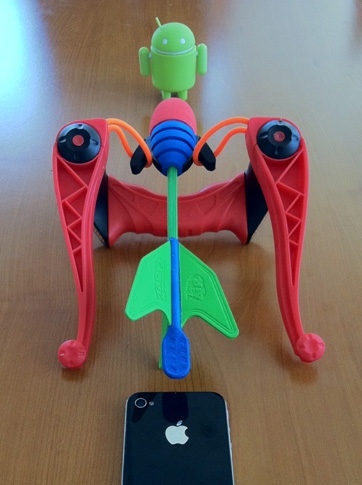 The Apple iOS vs. Android operating systems debate is the hottest since chocolate vs. vanilla. Unfortunately for Research in Motion (RIM), the fight has made Blackberry the new strawberry in that two-way battle.

The ChangeWave survey comprised more than 4,100 consumers. Eighty nine percent were U.S. respondents, so the facts pretty much pertain to North American consumers only. Also, the survey found Apple iOS and Google Android OS continue to dominate people’s preferences for mobile operating systems, so don’t get huffy that this survey didn’t get all in depth about Motorola, Research In Motion, Google, Microsoft, Samsung etc.

iOS is the top preference for buyers – with almost half of respondents planning to buy a smart phone in the next 90 days saying they prefer to have an iOS equipped iPhone, up two points since the March survey.

Android comes in a strong second with 32 percent. ChangeWave notes Android has gone up one point in terms of future buyer preference. In contrast, Research in Motion’s BlackBerry OS  is down one point and has hit its lowest level ever in a ChangeWave survey (14 percent).

Another low point in the survey is for Motorola, down four points to eight percent. The company benefited from the years iPhone blocked Verizon subscribers , but the Verizon iPhone release is now taking customers away for Motorola.

Things continue to look bad for RIM as well. During seven of the past 10 ChangeWave quarterly surveys since 2008 there has been a dramatic drop in RIM planned purchase share (see “Mobile Operating System Preferences” chart).

“I suppose this just shows the supply and demand aspects of development platforms,” says Dalton Caldwell, founder and CEO of App.net. Caldwell was previously founder/CEO of imeem until MySpace acquired the company in 2009. He recently wrote a blog on the topic of Apple iOS vs. Android OS, called “Should I develop for iPhone or Android first?”

“Android had a slow start when it first shipped because it was on one phone (the G1) on one carrier (T-Mobile),” Caldwell explains in an email interview with VentureBeat. “Through a variety of means, the Android ecosystem was able to get massive growth and distribution over the past few years, and thus the incentives for app developers to build apps for the Android platform has increased. So more apps will get made, which in turn makes the platform more attractive for consumers, etc.”

Caldwell stresses that he’s not speaking for entire developer community, but his anecdotal perspective is certainly valid.

Both industry leaders are far ahead of the overall “very satisfied” ratings for the other major operating systems – Windows Phone and RIM’s BlackBerry. RIM’s customer satisfaction ratings have fallen in nine of the past 10 surveys.

The rest of the survey isn’t as debate-worthy, but check it out here if you need stats on iCloud anticipation and smart phone manufacturer demand.