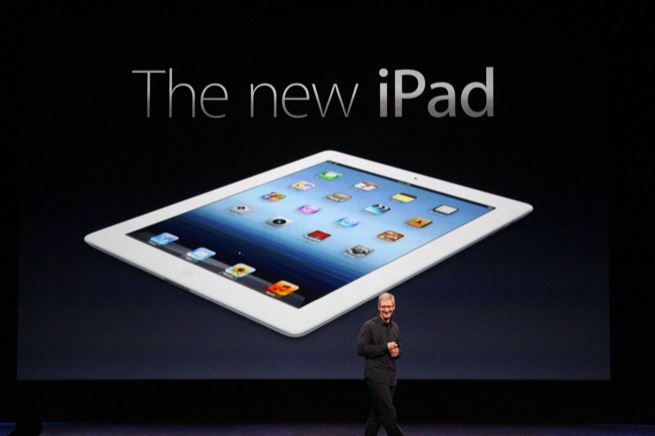 “Apple has its feet in in the post-PC future,” said Apple chief executive Tim Cook, kicking off the event by saying that Apple has sold 172 million “post-PC” devices, including the iPhone, iPad, and iPod, accounting for 76 percent of the company’s revenues in the fourth quarter of 2011. “It plays to our strengths, it’s what we love to do.”

The headline of the event, of course, was a new iPad, which sports a 4G LGE wireless data connection and a super high-resolution “Retina” display comparable to the one in the iPhone 4.

“We’ve taken it to a whole new level and are redefining the category that Apple created with the original iPad,” Cook said.

As expected, the new display is 2,048 by 1,536 pixels, with a pixel density of 264 pixels per inch. “That’s enough to call it a Retina display,” Cook said. “When you hold it at a normal distance, the retina in your eye cannot pick out the pixels.

The new iPad has Apple’s newest chip, the A5X processor, with a quad-core graphics system, in order to handle the 4X increase in pixels. (The previous version, the iPad 2, shipped with an A5 chip.) 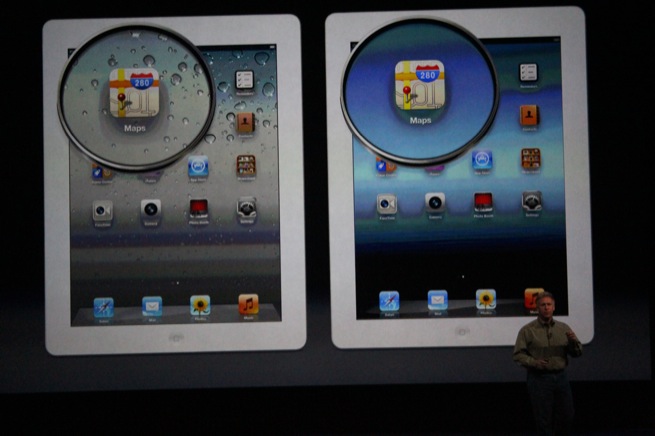 Above: Apple shows a comparison between the pixel density on the old iPad (left) and the new, Retina display-equipped one (right).

The wireless data standards supported by the new iPad will enable data speeds up to 73 Mbps, the company said. The previous version supported EV-DO and HSPA, while the new one adds HSPA+ (for a maximum throughput of 21Mbps), DC-HSDPA (42 Mbps), and LTE (73 Mbps). The device weighs 1.4 pounds (about the same as the previous model), is 9.4mm thick, and has enough battery power to run for 10 hours, or 9 hours while using 4G wireless data, according to Apple.

There will be two versions in the U.S., one available on the AT&T Wireless network and the other on Verizon Wireless. Both versions are capable of connecting to 3G networks around the world, and can also function as Wi-Fi hotspots (carrier permitting).

The iPad also includes an iSight camera (on the back) with auto face detection, auto exposure lock and auto focus lock. It records video at full HD resolution (1080p), and the A5X processor can also be used to stabilize images or do dynamic noise reduction on the fly.

There’s a new key at the bottom that is also a microphone, and the iPad now supports voice dictation in English, French, German, and Japanese. You simply tap the key and speak, and it will translate your speech into text on the screen.

“I hope you can see why we believe the iPad has enormous potential and why it is the poster-child of the post-PC world,” Cook said at the conclusion of today’s event. 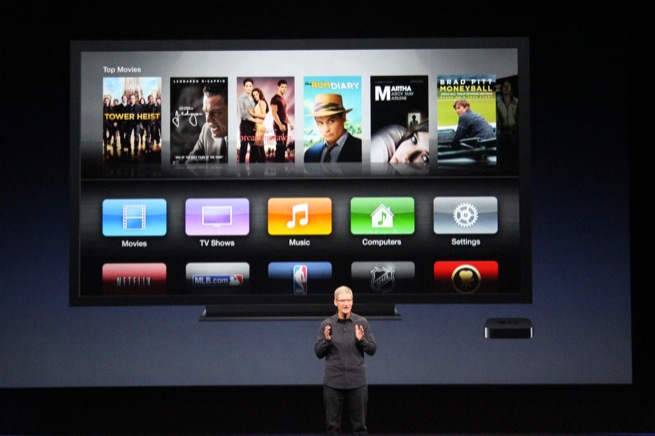 The company is also updating its Apple TV set-top box, although the upgrade fell short of the revolutionary overhaul that some observers expected. It now supports 1080p (full HD) resolution, up from the previous versions 720p. It’s also integrated into iCloud, Apple’s internet-based data storage service, which now has 100 million customers, according to Cook. It will offer TV shows from Apple’s partners the day after they air, much like the competing service from Hulu. Apple TV also includes the iTunes “Genius” feature, which will recommend movies for you based on what you’ve watched.

The new Apple TV will be available next week for $99, and Apple is accepting pre-orders starting today.

Apple is updating its software suite for the new iPad. iWork will have better charts, slideshow builds, and transitions. Each app within the iWork suite is still $9.99.

In the iLife suite, Apple is updating Garage Band with a “Jam Session” feature that enables up to four people to play together, using Bluetooth or Wi-Fi to link up their iPads.

iMovie for the iPad now sports a “trailer” feature for making movie previews, just like the Mac version of iMovie. You select some clips, fill out an outline and tap on “story board,” and the app tells you exactly what shots you need.

There’s also a new iLife app, iPhoto for iPad, which provides new, gestural photo-editing tools. It also supports “photo beaming” as a way of sharing photos, and integrates with iCloud for storing and sharing photos online. It is available in the App Store starting today, for $4.99.

“Don’t ever let anyone tell you that you can’t create on an iPad,” said Apple senior vice president Phil Schiller.

A customer in China downloaded the company’s 25 billionth app recently, winning a $10,000 prize that Apple had earlier offered.

We expected that Apple’s newest iPad will likely be called the iPad HD, although it appears that Apple eschewed that name in favor of simply calling it the “iPad.” It’s the latest iteration of what was the first commercially successful consumer tablet, which first launched in the spring of 2010. Although Android tablets have been chipping away at Apple’s market share, the iPad remains the most popular tablet model, and a new version is likely to sell many millions of units.

Since its launch in 2010, over 55 million iPads have been sold around the world. Apple CEO Tim Cook explained recently at the Goldman Sachs Technology Conference that it took Apple 22 years to hit that milestone with its Mac computers.

Indeed, Apple’s mobile products are creating a halo for the rest of its brand all around the world. The company recently reported a 111 percent jump in iPad sales to 15.433 million units sold in its first quarter 2012 earnings, contributing to the nearly $100 billion in cash the company is sitting on.

Rumors about the iPad have been flying for the past few weeks. We’ve speculated on what kind of screen, operating system, processing chip, and wireless standard it will support. The biggest rumor touched on the iPad’s display. Over the weeks, many hoped for the 2,048 x 1,536 Retina display on the new iPad, departing from the original, modest 1,024 x 764 pixel screen, and the company delivered.

It was also rumored that the new iPad would take advantage of LTE 4G, a wireless standard already supported by companies such as AT&T and Verizon. Until today, the iPad had only made use of 3G.

The iPad’s biggest competitors are Android tablets. Some currently run on 4G, and some 2,048 x 1,536 pixel Android tablets were announced at last week’s Mobile World Congress.

Tablets are branching out of their competitor landscapes, however. Cook believes these devices will overtake the PC market due to consumers’ desire for applications and portability. Over 170,000 apps are already optimized specifically for the tablet. The company recently hit 25 billion downloaded apps in the App Store, taking into account both iPhone and iPad apps.

Apple TV was also ready for a spruce-up since its initial launch, right around the same time as the original iPad in September 2010. The device allows owners to stream content purchased through Apple to a high-definition television, but it hasn’t exactly been a big seller for Apple. Still, according to a report by Strategy Analytics, Apple TV accounts for a third of all connected televisions. On Tuesday, rumors of the upgrade circulated as 98 percent of retailers no longer had the old Apple TV model in stock.