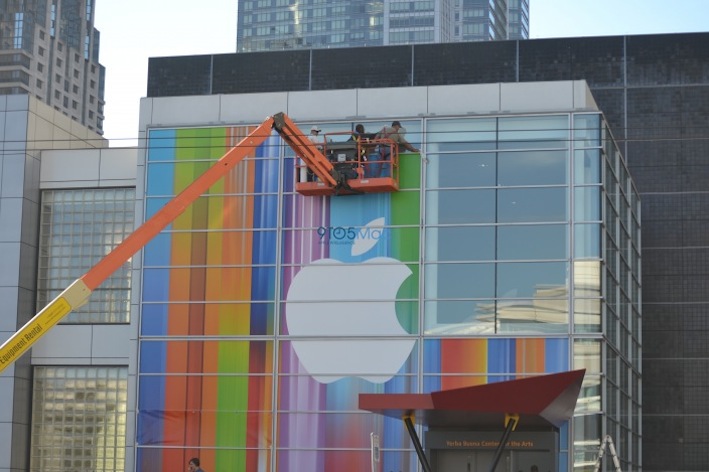 We’re pretty confident there’s going to be a new iPhone 5 in the world tomorrow.

Just look at the signs. Verizon has blacked out employee vacation days for the event, FedEx is planning for a shipping surge later this month, buy-back companies like Gazelle are offering specials on iPhone 4S returns, and both Sprint and Apple have put the 4S on sale.

And Apple is definitely holding an event in San Francisco, which will start at 10 a.m. Pacific time tomorrow; the invitation included the shadow of the numeral “5” underneath the date.

It’s like the world has put out the bat signal, and Tim Cook is ready to respond. I hope he wears a cape.

But after the iPhone 4S launch, when many, including our own Jolie O’Dell, said Apple was losing its design touch, the company may be feeling some pressure to perform.

“You know, consumers love Apple products. Apple should definitely be concerned about competition from Samsung, potentially new entrances from Amazon,” said Forrester analyst Sarah Rotman Epps in an interview with VentureBeat. “The reality is that Apple can release a moderately good product and tens of millions of people will buy it.”

Let’s take a look at what we can expect during Apple’s big day, and you can decide whether they’re going to be “moderately good” products or not.

What’s an iPhone launch without rumors? There may be no other iPhone that has spurred as much talk as the iPhone 5, however. We were yammering about this thing well before the iPhone 4S even made its way into the world. Poor iPhone 4S. It’s like the last person to show up at the surprise party before the birthday girl walks in.

But it seems the guest of honor — the iPhone 5 — is finally almost here. If the scuttlebutt is right, the iPhone will be long and lean, slightly larger than the current model, but with a new, smaller dock connector. The screen is expected to be stretched, along with the form factor, yielding to requests for more screen real estate. It might be as tall as 640 pixels wide by 1,136 pixels tall. (The current model’s screen size is 640 by 960 pixels.)

Expect some speed while surfing with that extended screen, as the Wall Street Journal’s sources say the iPhone 5 will come completely ready for 4G LTE data — something we haven’t seen from any of the previous iPhones.

The dock connector, or the place where the charger plugs in, is expected to shrink down to 19 pins. Because it will be smaller and thinner, it makes room for more hardware packed inside the phone, and that thinner build. As VentureBeat mobile editor Devindra Hardawar notes, it’ll likely spur a whole new range of accessories for the iPhone. It will also probably piss off a lot of current accessory manufacturers if an adapter is not introduced with the new connector.

“I think there are a number of things that are abundantly clear to me — and to most people who are watching this — as far as what will be in the new device,” said Forrester analyst Charles Golvin in an interview with VentureBeat. “The mystery is always around what are the things that you weren’t expecting that show up.”

Golvin expects to see near-field communication (NFC) support, particularly for a mobile payments-type feature, as well as some innovations around photography. He mentioned Apple should look out for HTC’s video-to-photo feature, which allows users to grab stills from videos taken on the phone, and Nokia’s just-launched Lumia 900 with Purview camera technology. Pureview is known to perform very well in low lighting conditions. These competitive phones show that the technology for advances in smartphone photography are there, the iPhone just needs to get jacked-up with them.

But what about the surprise element, that thing you didn’t expect? Golvin suspects Apple might introduce new colors to the line of phones. It’s not far-fetched. In the past, Apple introduced color to its laptops and iPods.

“Look, consumers like to trumpet to the world about who they are …they use their device to say something about themselves. When they first introduced white as a color, it sold really really well,” said Golvin. “Maybe if it were pink or some other really standout color scheme, that might help boost sales.”

Of course, he notes Apple probably isn’t going to have much trouble selling the phones.

A new phone needs a shiny new operating system, right? We think so too, which is why you can expect iOS 6 to launch Wednesday as well. The new OS was announced at Apple’s Worldwide Developers Conference in June and is queued up for a “fall launch.”

At WWDC, Apple revealed that iOS 6 will include Facebook integration, alongside its current Twitter integrations; a Do Not Disturb feature; updated FaceTime; and a new app called Passbook for keeping track of boarding passes, gift cards, and other wallet clutter.

It will also get a new, home-grown maps application after the company decided to slough off Google Maps. Google’s YouTube is also said to be missing from this iteration.

But the real question is what Apple will be doing with app discovery — the industry’s term for “helping you find new apps,” an increasingly difficult problem now that the App Store has over 500,000 apps. Since it purchased app search tool Chomp for a reported $50 million, Apple has slowly been integrating its technology into the App Store, and boy does it need the love.

“I think that the current mechanism for search in the app store for Apple devices is pretty bad,” said Rotman Epps. “It is one of the greatest difficulties for developers and consumers.”

Now that it owns Chomp, however, Apple could change what its search results look like and perhaps even roll over the “genius” recommendation tool for apps. That is, Apple would look at your app download history and provide suggestions on what you might like to download next.

Also part of Chomp’s technology is a “suggested search” feature. This looks at your apps and provides a set of app topics you might like to search. The feature puts words in consumers’ mouths in a good way. It helps them discover what they want before they can think of it, bringing new apps to customers and more downloads to apps that are often lost in the App Store ether.

We’ll have to wait until Wednesday to see if Apple ups the ante on app search, however.

What we do know is that iOS 6 will also include new Siri integrations available for the iPad. Those may come in handy when Apple reveals its …

Hold your horses. This one probably isn’t making the big reveal tomorrow, although supposed photos of the iPad Mini keep popping up.

“I will be so shocked if they announce an iPad Mini on Wednesday that I will probably pass out from the shock,” said Golvin.

There has been a lot of talk about a shrunken, cheaper iPad, which would put Apple in direct competition with the likes of Google’s impressive Nexus 7 and Amazon’s new Kindle Fire HD. And it is likely that Apple is at least considering making a pocket-sized iPad, as was revealed during the company’s recent trial with Korean competitor Samsung. Samsung’s counsel released an email in which a senior Apple executive cited the need for a smaller iPad, saying the late Apple CEO Steve Jobs was “very receptive” to the idea.

But together with the iPhone 5 announcement, an iPad Mini announcement would make a lot of news for one quarter. It makes more sense for Apple to release the iPad Mini in October or November when Apple is in a fresh quarter but still ahead of the holiday season.

“One thing they’re very very good at is maximizing the value of the building-up and exposure of these events. It wouldn’t make any sense to waste all that powder that has built up around the iPhone 5 with announcing a second device,” said Golvin. “I would expect that if there were such an event brewing, it will happen in the next month.”

When will the iPhone 5 ship?

As far as a shipping day for the iPhone 5, we’re still waiting to find out whether it will be available tomorrow or on the rumored September 21 date. Golvin’s not too worried about being left hanging, though.

“Unlike some of their competitors, you don’t walk out of an Apple event without answers to questions like how much does it cost, when can I buy it, who will be selling it. … The answer is typically now or in two weeks,” Golvin said.