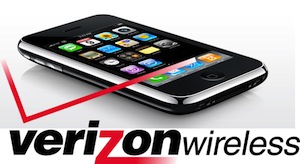 Every now and then, as users get more frustrated with AT&T’s iPhone services, rumors circulate that there’s a Verizon iPhone in the works. The latest such rumor came from the Wall Street Journal today, which reported that manufacturing of a Verizon iPhone will begin later this year, according to several officials briefed by Apple.

A fifth-generation iPhone that introduces a new form factor may also be in the works, according to the Wall Street Journal. Apple’s most recent generation phone, the iPhone 4, marked the first dramatic shift in design away from the 3G and 3GS models to a more industrial design.

AT&T has held an exclusive agreement with Apple to sell the iPhone since 2007, which has been a boon to the smartphone provider. Apple sold 8.4 million phones last quarter alone.

As usual, the latest rumor suggests the Verizon-enabled iPhone — which will use Verizon’s CDMA network technology — will include a chip manufactured by Qualcomm. The current generation of iPhones use AT&T’s GSM wireless technology.

VentureBeat earlier reported that Apple would build 3 million CDMA-enabled iPhones for use on Verizon’s network in December. That information came from Jeffrey Fidacaro with Susquehanna Financial Group. Analysts have pegged the launch to sometime in the first quarter of 2011.