So it begins. As the clock struck midnight on the West Coast of the United States, the preorder frenzy for the iPhone X began. And this round of preorders offered some interesting twists.

It appears from Apple’s website that when customers in the U.S. purchase one of the phones, they are required to select a carrier: AT&T, Sprint, Verizon Wireless, or T-Mobile. The iPhone 8, by contrast, still offers a “buy without a carrier” option through the purchasing wizard.

Even when picking a carrier, users still pay the full price: $1,149 for the 256GB version and $999 for the 64GB version. Some carriers were offering promotions, however. Verizon, for example, was offering a $300 discount if new users signed up for a $40 per month unlimited plan.

For those paying full price, the iPhone would presumably come unlocked — though that wasn’t explicitly stated on the Apple website, and customers expressed some confusion about this.

Can I seriously not order an unlocked #iPhoneX?

Of course, people were feverishly reloading the Apple website in order to place their order as midnight approached. A few super early birds managed to land a delivery date of Nov. 3, the first official day Apple says the iPhone X will ship.

This is the first time I’m going to get an iPhone on launch day. I’m pretty stoked! #iPhoneX pic.twitter.com/OMx0N0hSl4

But within minutes that delivery date started slipping: 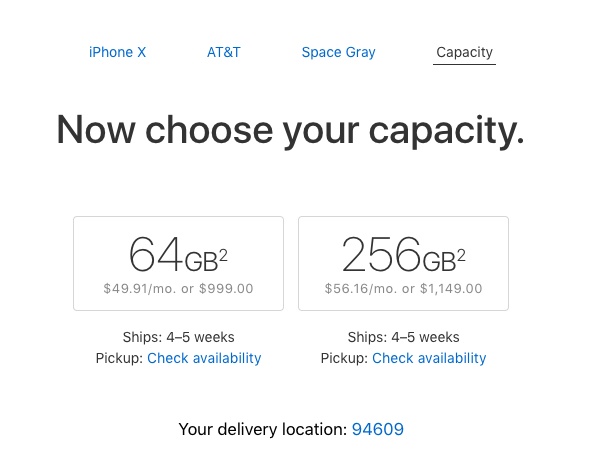 This is not really surprising, given widespread reports about the challenges Apple faced developing the iPhone X and complications with suppliers and manufacturers. Apple will likely get this sorted out eventually. The questions now are: How strong will demand be? And how long it will take Apple to catch up to that demand?

There has been speculation that orders for the other new iPhones, the 8 and 8 Plus, have been weaker than expected. Those phones went on sale in late September. Analysts assumed that part of the reason for the weak response was that consumers were holding out for the iPhone X to become available.

We might get more insight into that question next week when Apple is scheduled to report earnings.