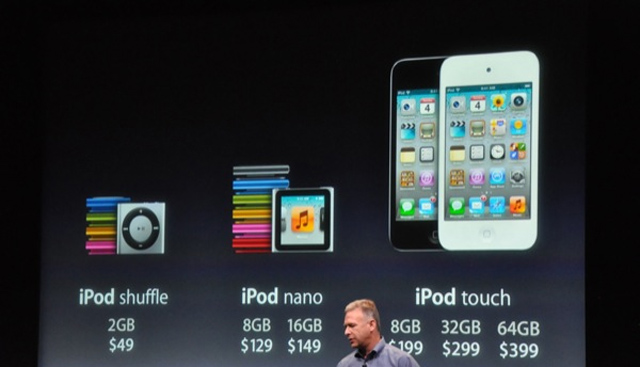 The iPod touch, the most popular iPod selling today, will stay mostly the same. It will run the new iOS 5 software, which will give the device a lot more features. Apple at one point called the device the best-selling handheld game console on the market today. The cheapest iPod touch 16GB model will drop by $30 to $199. The 32GB model will run $299 and the 64GB model will run $399.

The iPod nano has also had a minor update, with the addition of 16 new clocks for the people who like to use their iPod as a watch. The iPod nano will also drop slightly in price to $129 for the 8GB model and $149 for the 16GB model.

The iPod shuffle will continue to sell for $49 with 2GB of storage. It’s a popular choice for runners and exercise enthusiasts, so the company probably thought there was little reason to change it up.

Notably, there was no word about the iPod Classic at the keynote. But Apple has sent out a press release covering its iPod line up and kept the iPod Classic with 160GB of storage in the mix for $249. The model will be exactly the same, so perhaps Apple just decided it was best to leave it off the side.

What are your thoughts on Apple’s iPod line up?