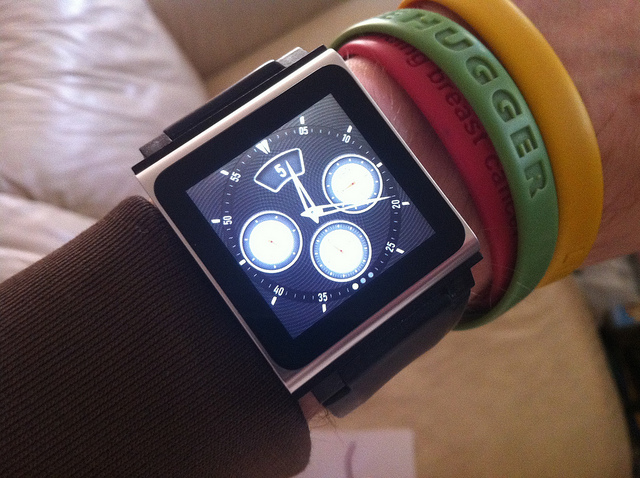 Now even the New York Times is reporting that Apple is developing “wristwatch-like devices” — though the interesting spin this time is that the devices are reportedly made of curved glass.

According to two sources familiar with Apple’s plans, the iWatch will run iOS and lean heavily on its curved glass design to differentiate itself from competitors. It sounds like Apple is working on yet another massive leap in how we view commonplace devices, similar to how the iPhone seemed generations beyond other cellphones when it was first released.

Corning’s new Willow Glass, a flexible new type of glass that’s both incredibly thin and bendable, could be the mysterious curved glass in question, according to the New York Time’s Nick Bilton. That wouldn’t be a huge stretch for Apple — Corning’s Gorilla Glass was brought back from obscurity thanks to Steve Jobs’ desire to have a strong glass for the iPhone. Gorilla Glass has since gone on to be an industry standard for smartphone and tablet screens.

The last iWatch rumor suggested that Apple was working on a Bluetooth-capable smartwatch with an Intel chip, but that report never really caught my interest since it seemed like a minor step for Apple. Introducing the first wearable device with curved glass to the public seems more like Apple’s style — just like how the iPhone made touchscreen smartphones seem commonplace, and the iPad made it clear that even large displays could benefit from touchscreen tech.

Given just how much hype the Pebble smartwatch project has seen, it’s clear that there’s a desire for some sort of high tech device on our wrists. An iWatch will likely do more than show you messages and texts — it will likely incorporate some sort of activity tracking technology, similar to Nike’s Fuelband and Jawbone’s Up.

While the tech world seems gung-ho for a big screen iPhone and the increasingly crazy idea of an Apple-made television, a small screen iWatch could ultimately be far revolutionary.

Update: The Wall Street Journal is also reporting on a potential iWatch today, adding that Apple has been in discussions with Foxconn about it.