Earlier this month, Apple registered a trademark for “iWatch” in Russia. Today, the company has trademark registration filings in at least four more countries, including Taiwan and Mexico.

It’s the strongest confirmation yet that the iWatch is real and that it is perhaps imminent.

Apple already owns the iWatch trademark in Jamaica and Russia. Today, reports surfaced that Apple has filed in Mexico, Taiwan, and Turkey. That might seem like an odd list of countries, but as per usual, there is some method to Apple’s madness. Filing first in countries like Jamaica is smart, an employee from Marcaria, a global trademark registration company told me this morning. 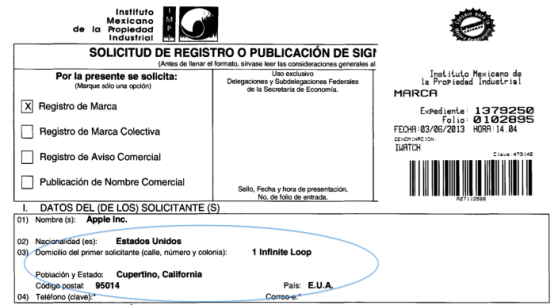 “There are some countries that have a public online database of trademarks and some that don’t,” the representative, who asked not to be named, said. As the employee added, if you want to register trademarks with the least amount of visibility and attention, that’s where you would start.

In other words, anyone can file any trademark in almost any country, without an specific intention to actually introduce a real product — much like the domain name system. Which means that Apple’s attempts to get the iWatch trademark could be blocked in numerous countries if it simply launched a major new product by, essentially, squatters.

And that can get expensive — Apple had to pay Chinese company Proview $60 million last year for ownership of the iPad trademark in China.

This is less of a problem in the United States, because the U.S. is the only country that requires a company have an actual, factual product that it is bringing to market before it awards a trademark, something called “proof of use.”

“The U.S. requires that you have a product,” the representative said. “You can file for a trademark without an actual product, but at the registration stage, you’ll have to show proof of use.”

Which is why, presumably, we haven’t yet seen a filing in the U.S.

Apple is apparently testing 1.5-inch OLED screens for iWatch, and Apple CEO Tim Cook has promised “amazing new products” for this fall and throughout 2014. Time will tell if iWatch is among them, but it’s looking more likely every day now — and 20 percent of American adults would buy an iWatch, sight unseen, according to a recent study.

Google Glass has been promised for consumer release before the end of the year.

Apple, you would think, might want to beat Google to the punch.