You can only put so many dents in the universe.

This week, Apple unveiled a respectable upgrade of its iPhone line.

So why do I feel so disappointed?

Maybe it’s because we expect so much from Apple. This is the company that brought us the first MP3 player that really mattered, the first smartphone to truly take the world by storm, the first successful touchscreen tablet, and the first ultralight notebook that people were really happy to use. And that’s all just in the past few years — reaching back further than that, Apple is responsible for the first all-in-one PC, the first commercially successful graphical user interface, and many more product design, manufacturing, and retail innovations.

This is what was so amazing about the late Steve Jobs: He drove the company to revolutionize industry after industry. Most successful entrepreneurs only get to change one industry, if they’re lucky; Jobs reinvented half a dozen.

It’s unfair to keep holding Apple to the same high expectations. After awhile, you run out of industries to reinvent. What’s next: Cars? The construction industry? Plumbing?

Not only that, even the best sluggers don’t hit home runs every single time they step up to bat.

Now, don’t get me wrong. This week’s upgrades look like excellent phones. The iPhone 5C has the same elongated, high-resolution screen of the iPhone 5, but it comes in a variety of primary colors and costs somewhat less than the original, at just $100 on contract or $549 off-contract. That should help Apple reach a bit further into the market for lower-cost smartphones.

Meanwhile, the iPhone 5S adds a much more powerful processor (the first in a smartphone to use a 64-bit processing bus), a substantially upgraded camera, and a spiffy new fingerprint sensor.

The company also said it was about to start rolling out iOS 7, the details of which it had fully explained a few months back, and which has been in developers’ hands since June. I’m underwhelmed by iOS 7, but it does offer a host of new features for developers and consumers — as well as some special “floating” effects that will help soak up some of that extra processing power. And iOS remains the most polished, coherent, and well-designed operating system available for a smartphone.

In all, it’s a solid upgrade to the iPhone line that should keep many current customers happy when it’s time to renew their contracts, and this might even attract a few new ones to Apple’s fold.

But the bigger issue is that Apple is facing an existential threat, and this week’s news suggests it has no clue about how to respond appropriately. Android now accounts for more than 80 percent of smartphone sales, while iOS is down in the mid-teens. This is a company that is slowly but surely losing the final stages of its war for the phone industry. Merely keeping the faithful happy is not working. Incremental upgrades are not going to stem the tide.

Consider the pricing of the iPhone 5C. It’s cheaper, yes. But as my colleague John Koetsier has pointed out, its unsubsidized price is still hundreds of dollars more expensive than competing Android phones. That makes a huge difference in countries where a few hundred dollars amount to a month’s worth of wages. 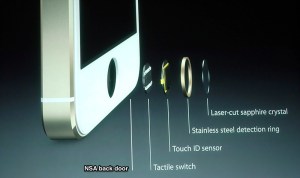 Above: The detail Apple left out.

And consider the addition of the fingerprint sensor. I joked that Apple left out a key part of its technology diagram by not including the secret NSA backdoor. That’s a timely jab, given the recent news that the NSA has targeted iPhones for hacking and has successfully captured images from intelligence targets via the device. It’s also a bit unfair, since Apple assures us that the fingerprint data is encrypted and will make it out of the phone, let alone into the cloud — so until the iPhone 5S suffers a particularly hostile hack, that data is probably safe. But the real question is: Why? What is so great about a fingerprint sensor? It’s a nice, convenient way to unlock your phone — assuming it works more reliably than prior sensors — but it’s hardly redefining the rules of the smartphone game.

Finally, there’s the question of the iWatch. Many of us expected Apple to launch a wrist-mounted wearable device this week, but there wasn’t a peep about this in Cupertino on Tuesday.

Smartwatches are, for now, kind of a silly category. Fewer than a million of the things are sold each year, mostly to geeky tech enthusiasts. The biggest consumer entry into the smartwatch space was Samsung’s launch, last week, of its Galaxy Gear watch — a news event that got an extra bit of news hype when VentureBeat got an early look at the thing (you’re welcome, Samsung). But the Galaxy Gear is bulky, awkward, only works with Samsung phones (for now), and will probably cost about $300.

One of the reasons we were all hoping for an iWatch is that this is exactly the kind of product category Apple excels at doing. As it did with tablets, we all wanted Apple to come in and show us how to build a product that people will really want. No doubt Apple would come up with something more elegant, more svelte, and more desirable than anything that’s come before, and suddenly no one would mind spending $200 or $300 on a smart watch any more.

But Apple didn’t do that. There was no sign of a watch. So those of us in Silicon Valley are left watching, wondering, and feeling a little empty inside. Maybe it will show us something amazing later this fall, as CEO Tim Cook has promised. Maybe not. In the meantime, we’re left with these multicolored iPhones, and a growing sense that Apple is turning into a more ordinary tech company every day.

Jobs is gone. It looks like Apple’s magic is slowly seeping away now too.

(Below: A video interview I did with KRON-4 this week.)