Apple’s Maps application has come a long way since its inauspicious 2012 launch, which blackened the company’s eye and cost it a key executive. Over the next six years, Apple refined the app with new 2D and 3D maps, much-improved driving directions, and tools to navigate transit systems, all in the name of improving its reliability and utility. Apple Maps may not have eclipsed Google Maps, but it’s become a true peer, excelling in some ways while remaining behind in others.

It’s no exaggeration to say that Maps is going to take another major leap forward this year, thanks in part to iOS 13 and iPadOS 13. The new iPhone and iPad operating systems share a couple of major improvements that will increase Maps’ depth, while related server-side updates will bring dramatically improved 2D cartography to U.S. users by year’s end.

The most stunning addition to Maps is the photographic product of mapping vehicles Apple has been sending out across the world, apparently starting in California: Look Around. Currently available for testing in Northern California, the feature provides better than 360-degree street level views of major roads and destinations: You’re able to pan left, right, up, and down, even seeing (limited) 3D depth in each image.

When the feature was announced at WWDC, it was quickly derided in some quarters as “Apple inventing Google Street View,” but the truth is that it’s a reinvention of Street View with features Google will be hard-pressed to mimic without re-mapping every street in the world. During hands-on testing, it becomes obvious that objects such as cars, light poles, and trees are separate objects from other parts of the backgrounds, a cool pseudo-3D effect that makes each image look more realistic.

Tapping anywhere on the screen shifts your perspective, as well, so you can move up and down streets just like Street View. The difference here is that you move through what feels more like 3D space than just transitioning between heavily distorted 2D pictures. Once you’ve seen Apple’s alternative, you’ll find it hard to look at Street View the same way.

“Wait, there are folders in Maps now?” Even if you watched Apple’s WWDC keynote where Collections were first discussed, you might have missed the point of the feature: Yes, Apple has added location folders to Maps. Collections enable you to group together lists of locations (“Places”) for whatever purpose, name the folder, and sort the contents by name, distance, or date added, as shown below. 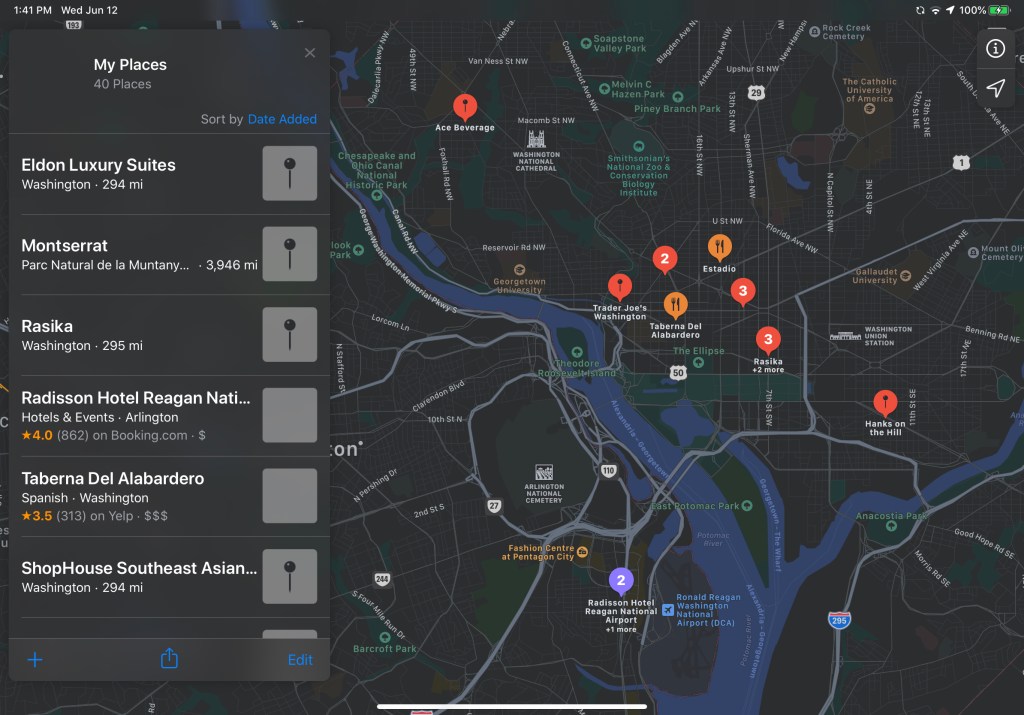 This is different from iOS 12 (below), which maintained a single list of Favorites across the globe for later examination, as shown below. The newer version of Maps really enables you to focus on the specific types of destinations that matter to you at a given time, simply by selecting a folder with a quick tap. 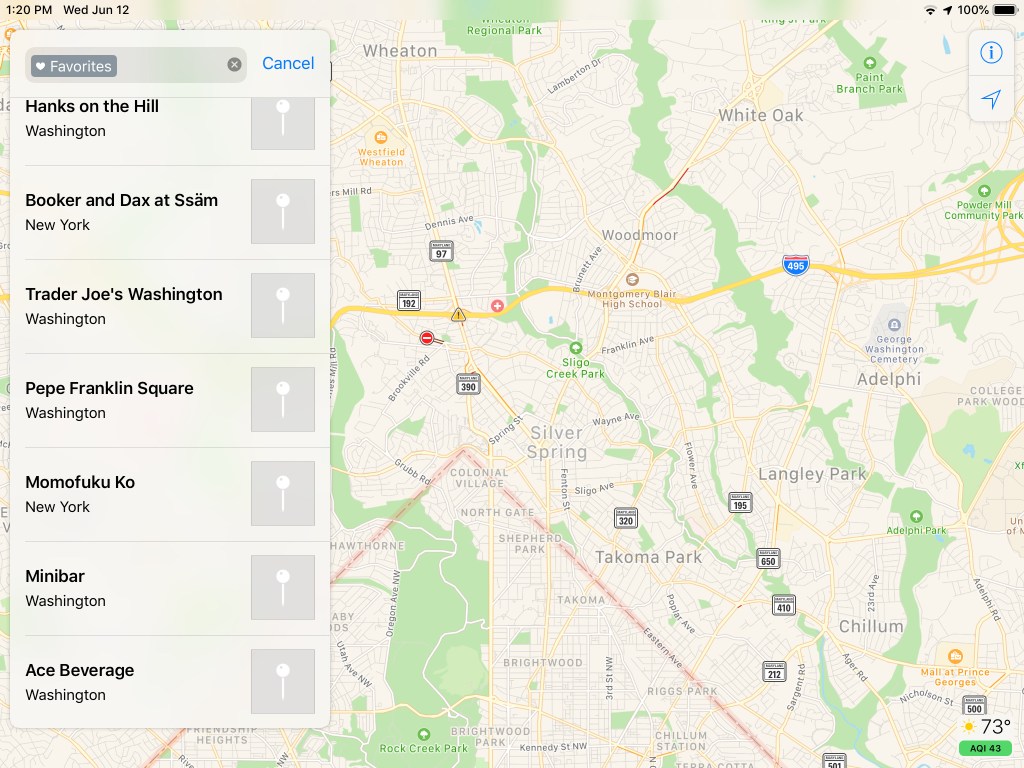 Using the Collections system, you can create a “Daily Commute” folder with destinations that might be useful on your way to or from work, a “Visit Washington” folder with your hotel and preferred tourism locations, and so on. Each one opens the map to show the specific geography covered by your locations, letting you drill down to color-coded, high-contrast dropped pins with pinch and expand gestures. 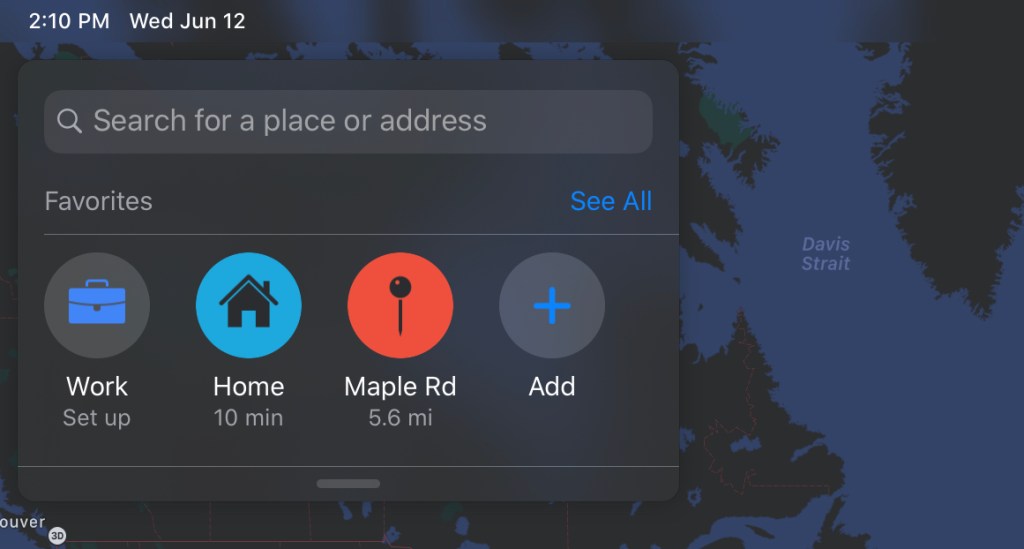 A related change redesignates “Favorites” to actually mean “locations you visit the most.” When you open Maps in iOS and iPadOS 13, the first thing you’ll see is a display of large circular “Favorites” icons for your home and work, guiding you to register preferred addresses for each within your “Me” Contact Card. Maps also lets you add additional large icons for one-tap reference whenever you open the app.

If your car was recently parked, you’ll also see a Siri Suggestion that enables you to quickly find it nearby. That’s not a new feature, but it’s automatically surfaced above your Favorites when you’re not at home.

The other key change coming to Maps this year (and beyond) is a dramatic upgrade to the flat-shaded “Map” images that are rendered by the device rather than using photographs or textured 3D models. As noted in a report last year, Apple’s goal with these Maps is to increase the level and accuracy of ground-level detail available without photography, enabling better views of forests, walkways, sporting areas, and swimming pools, among other areas that aren’t just roads and buildings. (Apple also said last year that it will be using anonymous crowdsourced data to provide better traffic guidance alongside the improved maps.) 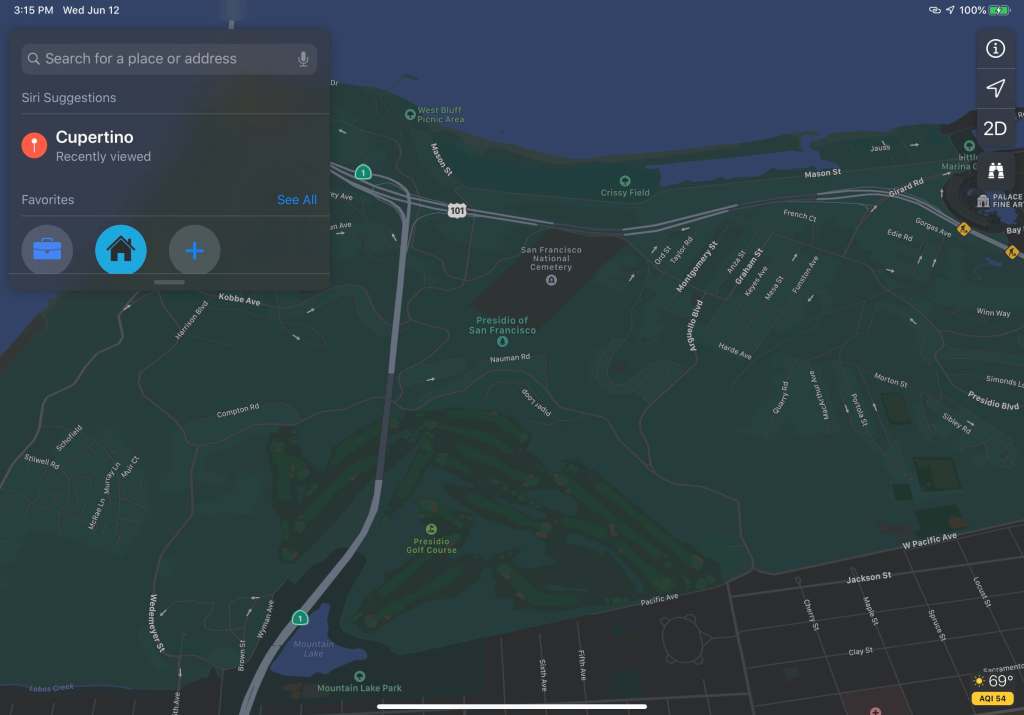 While the improvements have been rolling out over the last year and should be visible to iOS 12 users as well, they again started in Northern California and are making their way across the country by the end of 2019. That should mean that you’ll begin to notice things like course-level details at local golf clubs (rather than big green areas) across many U.S. cities and towns around the time iOS 13 and the first iOS 13 devices become available.

The improved flat-shaded maps should be visible on macOS Mojave and Catalina. So far, it doesn’t appear that Look Around or Collections will be included in Catalina’s version of Maps, which still has a 2018 date and is labeled version 2.1.

Apple’s 2019 improvements to Maps aren’t so much flashy as functional, making the app easier to quickly consult for lists of related destinations, and properly ascertain ground-level details from either surprisingly robust Look Around photography or more precise flat-shaded cartography. Thus far, everything works as expected, albeit within a very limited geographic area — the new Look Around feature doesn’t even work in Los Angeles yet, from what I could see.

Improving a mapping app clearly isn’t easy, especially when Apple has to go up against Google, which has added everything from offline maps to business messaging and robust data about individual businesses to its own app over the years. But iOS and iPadOS 13 will soon come at least a little closer to supplanting Google Maps as a daily navigation system, and for some people may fully eliminate the need to rely upon Google’s tools (and frequent personal tracking) going forward.