Apple’s music streaming service Apple Music unexpectedly arrived on Amazon Echo speakers just in time for the 2018 holiday season. Now it appears to be coming to Google’s speakers and smart displays, though the specifics are somewhat ambiguous.

Google’s support for Apple Music was revealed in a new update to the Google Home app, version 2.9.118, which included the service within the list of “more music services” that Google Assistant will play from. The app allowed users to tap on Apple Music to select it as the default music service provider, but the integrated “link account” button wasn’t functional, unlike the app’s adjacent options for Pandora, Deezer, and Spotify.

At last count, Apple’s service had over 50 million subscribers, a number the company is apparently trying to grow by supporting rival devices. To that end, Apple and Amazon announced a deal to bring Apple Music to Echo last November 30, promising that the feature would become available to users during the week of December 17. Echo speakers actually began to support the feature on December 14, enabling users — after signing into their Apple Music accounts in the Alexa app — to ask Alexa to play Apple’s Beats 1 radio, playlists, individual songs, and other content.

Like Amazon’s Echo speakers, Google’s lineup of audio products offers a considerably wider range of price and performance than Apple’s sole smart speaker, HomePod. A tiny Home Mini starts at $49, with the larger Home priced at $129, the screened Home Hub at $149, and the powerful Home Max at $399, though each is frequently discounted. Recent estimates list Google as the number two seller of smart speakers behind Amazon, with the two companies collectively enjoying over 65 percent market share compared with Apple’s roughly 4 percent.

Updated at 10:07 a.m. and 10:43 a.m. Pacific: Following publication of our article, a Google spokesperson offered the following statement regarding the addition of Apple Music to the Google Home app.

Apple Music is currently only available for Google Assistant users on mobile phones. We have nothing to announce regarding updates to Google Home. 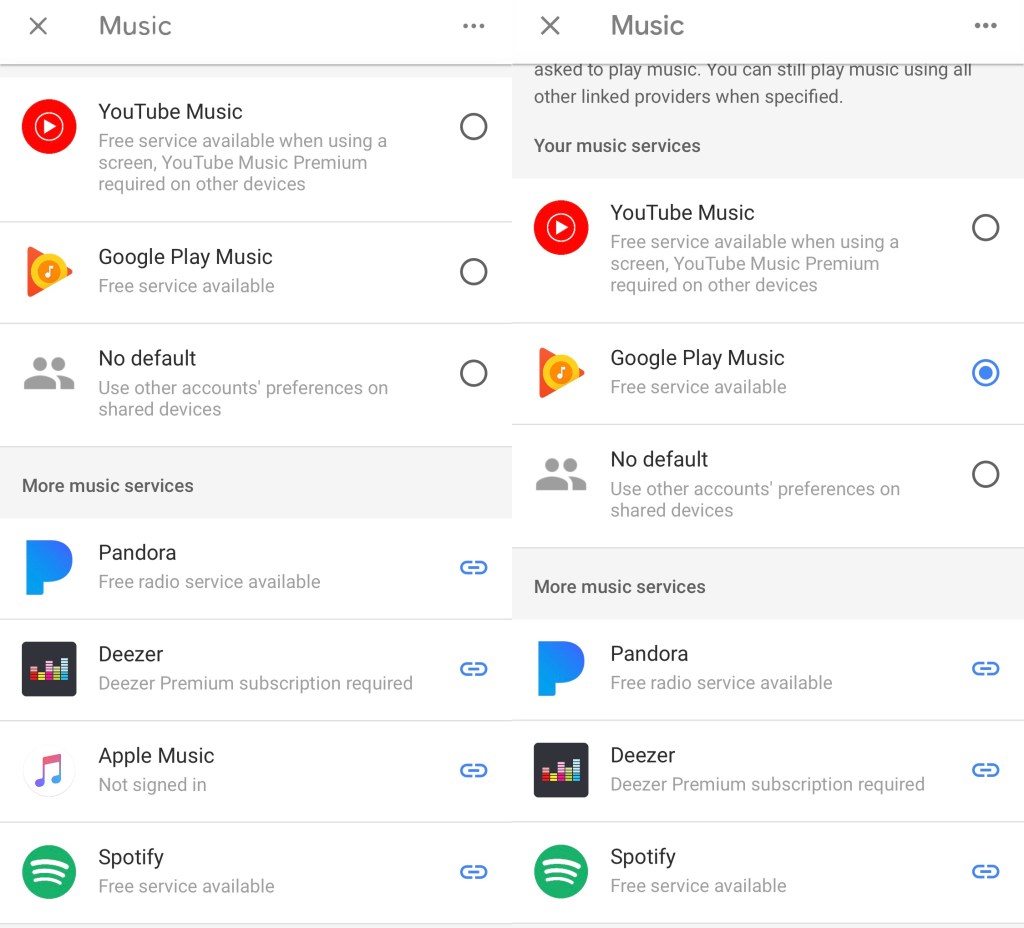 Above: The Google Home app as it originally appeared (left) before the Apple Music reference was deleted (right).

Improbably, the company yanked the Apple Music link section from the Google Home application — at least for the time being. Only Pandora, Deezer, and Spotify remain as competing alternatives to Google’s own YouTube Music and Google Play Music.

However, Apple Music both appears and works in the iOS app Google Assistant, where it was added in late 2017. Google Assistant displays Apple Music a little differently than Google Home did. First, it appears under a separate section titled “services with limited availability,” rather than under the “more music services” section. 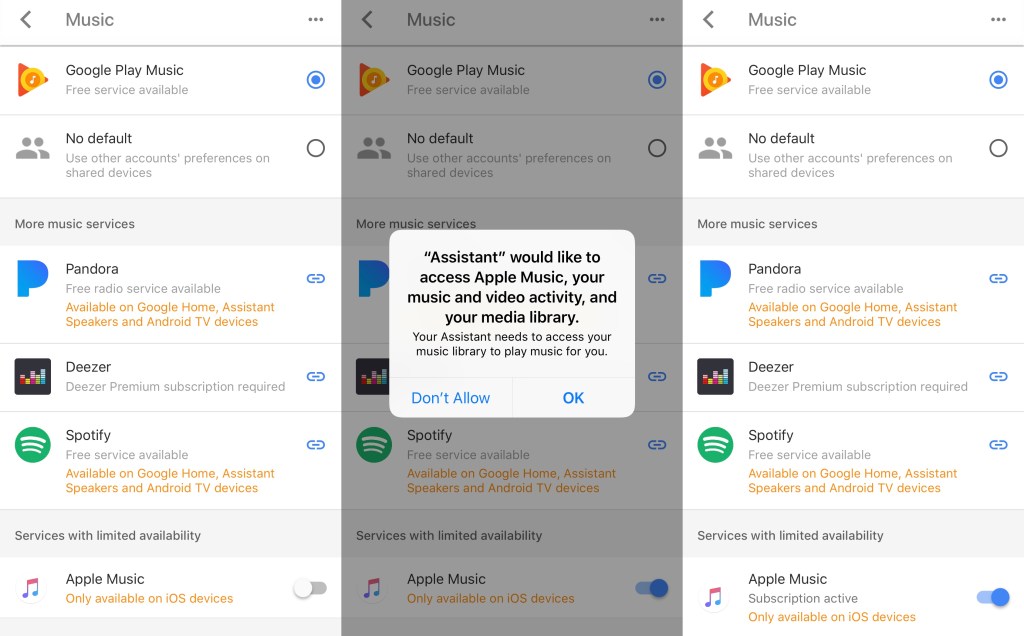 Second, instead of displaying the “link” icon, Assistant has an on-off switch, which when flipped to “on” (and given permission) automatically signs the app into your Apple Music subscription. The same dialog box also apparently permits access to your device’s “music and video activity, and your media library.”

It’s hard to believe that Google would have just accidentally added a competitor’s music service to its device-focused Google Home app, so stay tuned — hopefully these rivals will be making beautiful music together soon.