Apple Pay works great, but some have wondered why retailers would want to use the technology when it involves buying new point of sale systems, retraining employees, and still having to pay transactions fees to the credit card companies.

BRP believes, however, that 38 percent of large retailers in North America will be supporting Apple Pay by the end of this year, and that Apple Pay will be the most widely used mobile payments platform among large retailers.

The survey finds that 56 percent of large retailers believe they’ll be supporting Apple Pay by the end of 2017.

The survey was fielded in November and December of 2014. BRP published its results in mid-January, a company spokesman told VentureBeat.

Today, it’s PayPal that’s leading the pack, with 13 percent of retailers supporting the platform. What will PayPal do to hold off Apple this year? Well, first of all, it will need to develop a better way of letting people pay in brick-and-mortar stores. 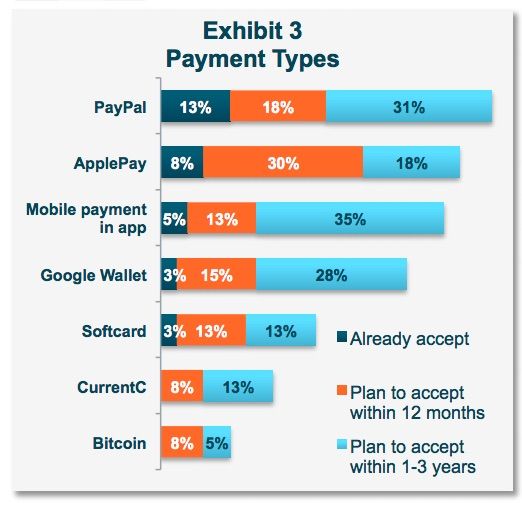 During Apple’s earnings call last week, CEO Tim Cook said his company has been hearing from point-of-sale system suppliers that merchants have been expressing strong interest in systems that support Apple Pay.

“More merchants have signed up, and adoption is strong,” Cook said.

“Given that we launched in October, I’m unbelievably shocked, positively shocked, at how many merchants were able to implement Apple Pay during the holiday,” he added.