Leading into the expected June debut of iOS 14, Apple has been testing what was expected to be the final beta version of iOS 13 — previously numbered “13.4.5.” Today, the company is changing up the beta cycle with the release of iOS 13.5, a revised version that includes the coronavirus exposure notification system it co-developed with Google.

Prior to now, features in the new iOS point release were relatively trivial, including an updated music link sharing feature for social networks, and bug fixes. But the addition of the exposure notification tool is significant. It will enable users of both iPhones and Android phones to optionally cooperate in sharing anonymized location data, flagging potential COVID-19 contacts. If a user is diagnosed with the virus, an anonymous notification can be passed on to people who were within Bluetooth proximity of the user’s phone, alerting them to the prospect of infection.

Apple and Google have worked aggressively to build trust in their contact tracing solution, adding more privacy-focused features into the system last week. But it remains unclear whether a critical mass of users will actually adopt the feature, and whether it will practically deliver positive results. The United States and some EU countries have backed the initiative, accepting the tech companies’ approach to user privacy and decentralizing data, while the United Kingdom has signaled that it will instead rely on its own app and sharing solution. Scientists and researchers have expressed concern about the potential privacy implications. 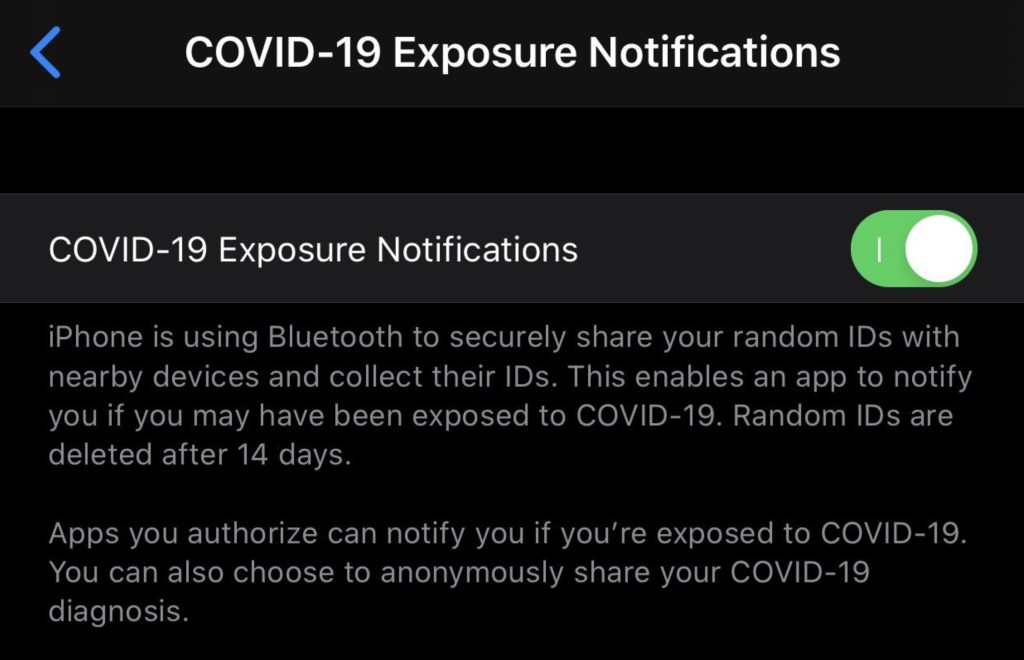 The COVID-19 Exposure Notifications feature appears as an on-off switch in iOS 13.5, disclosing that the iPhone is using Bluetooth to “securely share your random IDs with nearby devices,” while giving users the choice to share their diagnosis with others. Authorized apps will be able to provide notifications if you’ve been exposed, as well as performing on-device calculations of exposure risk level, based on estimated distance, duration, and other factors. It’s unknown at this stage how significant battery drain will be when using the feature.

A smaller feature is designed to speed up iOS 13.5’s authentication of users wearing face masks to protect against the virus. iPhones with Face ID will now quickly display the passcode entry screen when a mask is detected, rather than delaying for a full scan attempt.

Described as “beta 3” as it’s carrying forward the release cycle from iOS 13.4.5, iOS 13.5 is available now for download from Apple’s developer site, as well as an over-the-air update for iPhones running the prior beta OS. The prior iOS 13.4 beta cycle took 1.5 months from start to finish, and the final version of iOS 13.5 is expected to be released in mid-May, expanding the number of users with access to the new features.

Apple’s software development tool Xcode 11.5 has also been released with developer API-level support for the feature, and although its iPadOS, macOS, tvOS, and watchOS operating systems aren’t expected to add contact tracing, they’ve all been bumped to the .5 suffix as well.

Update at 10:30 a.m. Pacific: A private Google Play services update beta is also being released today, enabling some Android Studio developers to begin testing the exposure notification feature. Android devices will not require a full system update; the new feature will be enabled on phones running Android 6.0 or later. Both companies plan to release sample code for developers on Friday.