As promised during September 12’s Gather Round event in Cupertino, Apple today released macOS Mojave — aka macOS 10.14 — to the general public. Mojave was originally revealed in beta form during Apple’s Worldwide Developers Conference in June 2018, and has since evolved through 11 developer betas into today’s final release.

Though Mojave is substantially focused on under-the-hood improvements, it includes several major changes to the Mac’s Finder, as well as a small collection of apps that were ported from iOS. On the Finder side, Apple has introduced a system-wide Dark Mode, which optionally reskins the entire user interface with black or dark gray elements. Dark Mode pairs up with Dynamic Desktop, which can automatically adjust certain desktop images in sync with time of day (morning, afternoon, and evening) changes.

Mojave includes macOS-optimized versions of Apple News, Home, Stocks, and Voice Memos, which now look and work nearly the same across iPads and Macs. From a consumer perspective, these previously iPhone- or iPad-specific apps add extra features to the Mac, notably including the platform’s first official support for HomeKit accessories through the Home app. On the developer side, these apps served as internal Apple tests of an initiative called Marzipan, which over the next few years will enable iOS apps to be ported to the Mac with minimal UI changes. 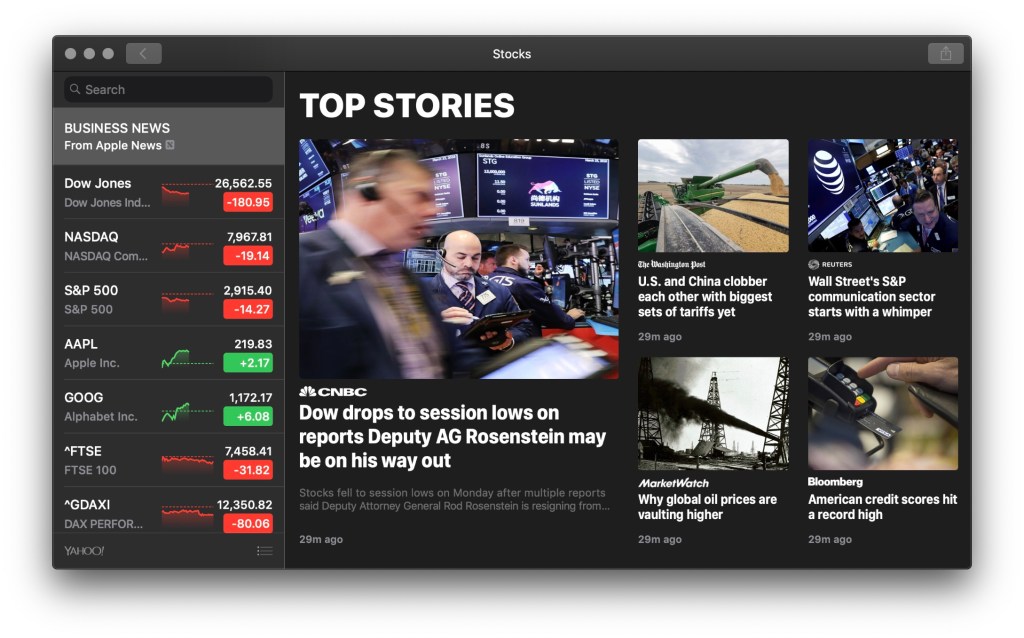 Smaller quality-of-life additions make Mojave a nicer OS to use every day. A new feature called Desktop Stacks auto-arranges common desktop items into stacks based on content, date, or tag, so screenshots all appear as a single-icon pile rather than filling your desktop with clutter. Additionally, Gallery View in the Finder lets you preview and make minor photo adjustments to items in folders without opening the Photos app.

Mojave can be installed on Macs “introduced mid-2012 or later,” including the following models:

It’s unclear whether today’s release of Mojave will include support for Group FaceTime, an update to the FaceTime app designed to permit dozens of people to participate simultaneously in voice or video calls. The feature was yanked from iOS 12.0 and Mojave betas at a relatively late stage of development, and is expected to be added back at some point in the fall — potentially at a rumored October Mac and iPad event.

macOS Mojave can be downloaded now from the Mac App Store here. The 5.7GB operating system is available worldwide as a free upgrade for Mac users.