Vigilante — available only in New York City at launch — sends users a push notification of crimes in progress so they can either choose to avoid the area or go to the scene to broadcast live video as the crime takes place.

The Vigilante iOS app launched Oct. 26 to acclaim from celebrity backers like Deepak Chopra and Russell Simmons, but the app shut down 48 hours later due to concerns expressed by Apple.

“We are working with Apple to resolve their concerns. In the meantime, the Vigilante app will continue to operate for those who already have it,” reads a message on the Vigilante website. The message goes on to say that an Android app is next.

Chopra is a friend of Andrew Frame, founder of Sp0n, the New York-based startup that created Vigilante.

Chopra said a group of underprivileged teens whom he helped become yoga teachers are among the first users of the app.

VentureBeat reached out to Sp0n for more information about Vigilante, but the company declined to comment.

Sp0n believes the 911 system should be open, Frame told Gizmodo in an email, but today Vigilante alerts are sent based on a combination of “technology and people, police scanners, and network of antennas (sic).”

When asked in a brief phone conversation Monday if the New York Police Department is an any way working with Sp0n, a spokesperson said “crimes in progress should be handled by the NYPD and not a vigilante with a cell phone.” 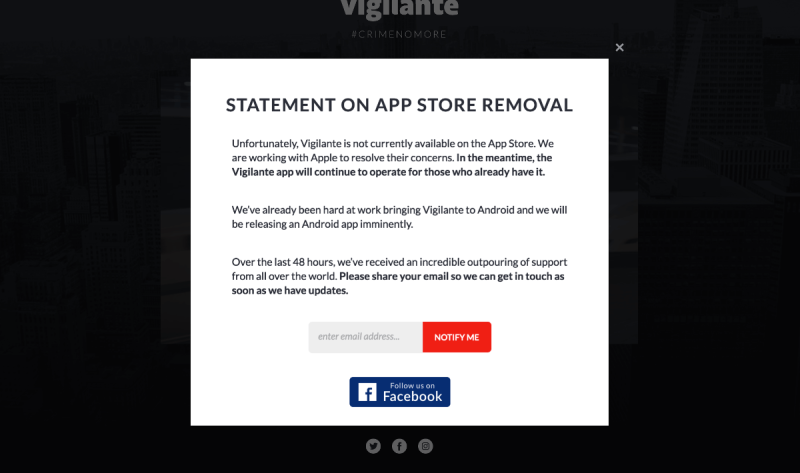 “The lens of the camera is incapable of lying. When we are able to look at a situation from multiple angles, the truth emerges,” Vigilante tweeted shortly before the app was pulled.

In a Medium post published a day before the app’s launch, Vigilante spelled out its intention with a series of questions.

“Can injustice survive transparency? What if everyone within a quarter-mile of every reported crime were immediately made aware of it?” the post reads. “Would crime as we know it still exist? Could we restore trust between law enforcement and community? Could we eliminate bias and injustice?”

Report: A vigilante is on the scene at Penn Station. A Man is being assaulted on the 34th floor. #CrimeNoMore pic.twitter.com/COrrldOzWI

The potential benefits of an app like Vigilante to restore trust between police and communities while attempting to reduce crime could be considerable, but it also seems to open up a lot of potential liabilities and pitfalls.

What happens when a crime happens inside a building or on private property (as it did in the above tweet) and vigilantes gather? What about the risk of injury to Vigilante users, bystanders, police, victims, or the person who committed the crime? Beyond being told to “keep a safe distance,” what kind of training can Vigilante provide its users to ensure their safety and the safety of others?

There may be a lot of daylight between citizen justice groups like the Minutemen in border states, the WITNESS program to train people to record video of police activity, and a venture capital-backed startup like Sp0n, whose website offers no information, just the quote “The revolution will be televised.”

What they have in common is the risk that passionate citizens or the armed law enforcement officials they come in contact with could get hurt, especially if individuals are provided little or no training.

To learn if or when Vigilante will become available again in the App Store, visit vigilante.live. To see an idealized version of how Vigilante works, watch the video below.