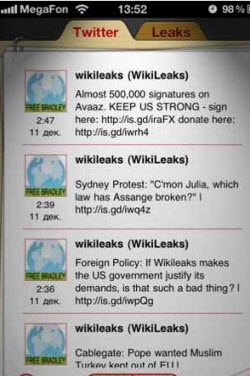 Apple said Tuesday that it has removed a WikiLeaks app from its App Store because it violated the company’s developer guidelines.

Trudy Muller, a spokeswoman for Apple, said to the New York Times that apps “must comply with all local laws and may not put an individual or group in harm’s way.” The latter is a reference to complaints that WikiLeaks’ publication of secret diplomatic cables has put the lives to diplomats and their acquaintances in danger.

The decision is another setback for WikiLeaks. Government officials have been trying to isolate WikiLeaks by pressuring those who do commerce with it to stop doing so. Companies such as Amazon, Visa, MasterCard, and PayPal have dropped WikiLeaks for claims similar to Apple’s.

The $1.99 WikiLeaks app was only up on the App Store, which supplies apps for the iPhone, iPad and iPod Touch, for three days. The developer promised to donate $1 for every download to groups that promote the future of online democracy.

Meanwhile, WikiLeaks founder Julian Assange lashed out at critics in an interview with the Times of London. He dismissed rape charges against him in Sweden as part of a “smear campaign.” The Guardian newspaper printed a portion of the police report related to the incident, where Assange is accused of forcing a woman to have sex with him without a condom.

Assange said he has enough information to force an executive at a major American bank to resign.