Apple today revealed two new tablets: a 10.5-inch iPad Air starting at $499, and the fifth-generation iPad mini, starting at $399. The two models are being offered as midrange alternatives to last year’s entry-level $329 iPad, and the Air effectively replaces the now-discontinued 10.5-inch iPad Pro at a lower price point.

Both new models include Apple’s A12 Bionic processor, which represents a major step up in performance for the prior iPad mini and a still significant jump for the iPad Air over the iPad Pro, which previously had an A10X Fusion chip. The iPad Air also features the slimmer bezels previously found on the iPad Pro’s front, enabling it to have a higher screen-to-body ratio than the basic iPad.

But the iPad Air isn’t just a renamed iPad Pro. Also known as the “iPad Air (3rd Generation),” the new model has a 10.5-inch screen and loses the ProMotion 120Hz refresh rate of the Pro but keeps the 2224 x 1668 resolution, P3 wide color, and True Tone features introduced in the older model. It also drops from four speakers to two, like the entry-level iPad, and from a 12-megapixel rear camera down to 8MP. 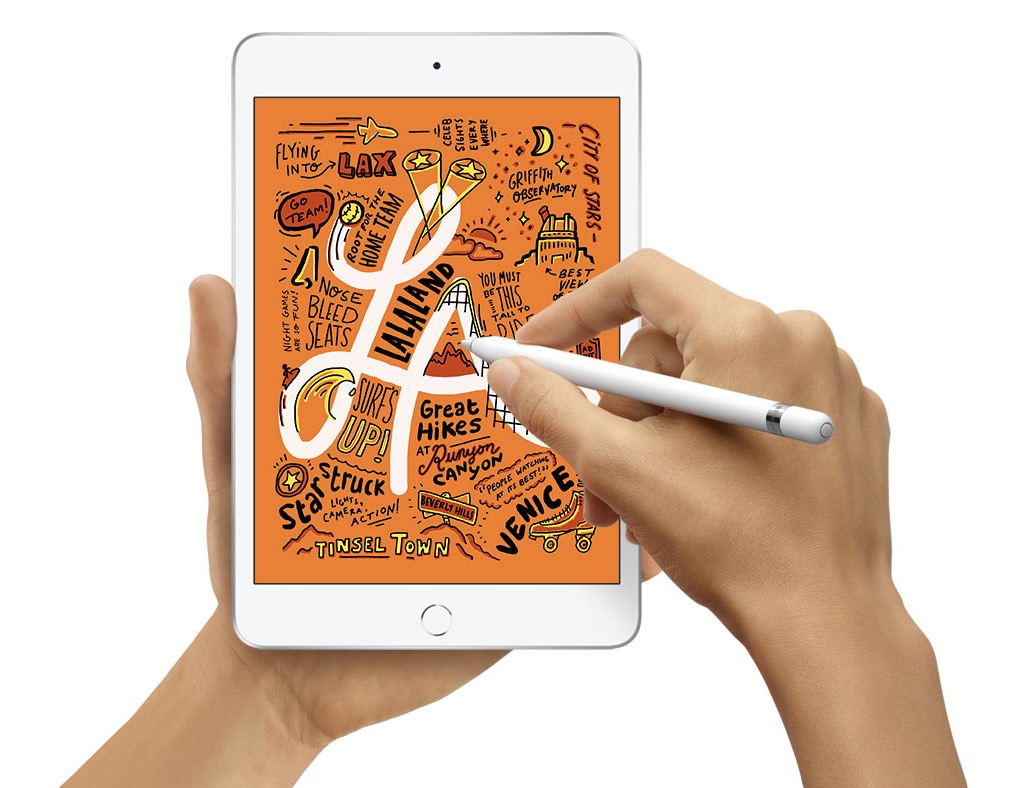 By comparison, the iPad mini is more of an internal than external upgrade. It still has the 7.9-inch screen size and 2048 x 1536 resolution of prior-generation iPad minis, though with the same P3 wide color and True Tone display upgrades found in the iPad Air. Gaining Apple Pencil support enables it to be used as a small drawing and note tablet — a huge potential boon for small businesses and delivery people.

Similarly, while it’s stuck with two rather than four speakers and doesn’t support Smart Connector accessories, the processor inside jumps from the A8 to the A12 Bionic — an upgrade that should radically improve app speed and general AR/AI performance. The iPad mini 4 was previously one of Apple’s longest-running devices without an update, making the jump to last year’s second most powerful A-series chip seem gigantic.

Apple has also bumped the iPad mini 5’s front camera from 1.2MP to 7MP, mirroring the spec of the new iPad Air, and added 1080P video recording for selfies. While their rear cameras are both 8MP in resolution, neither of the new models has Portrait mode, image stabilization, stabilized Live Photos support, wide color capture, or True Tone flash capabilities.

That aside, the new models aren’t meant to be testing grounds for new technologies. Both models use Home buttons with Touch ID fingerprint scanners, smaller and lower-resolution screens than the iPad Pro, and chassis that are aluminum on the back with white or black glass on the front. Once again, they both promise up to 10-hour standard battery life and up to 9-hour cellular battery life.

They each also continue to have a single front-facing camera and use a Lightning connector rather than USB-C, which is to say that they don’t incorporate two of the 2018 iPad Pro’s signature changes. As such, they won’t be able to use Apple’s Animoji or Memoji features, but most prior iPad accessories — including the Lightning-based original Apple Pencil — will continue to work.

Each model comes in a 64GB default configuration with Wi-Fi 5 and Bluetooth 5 support, jumping to 256GB with a $150 bump in price. Cellular (4G LTE) models of each tablet are available for $130 more and start at $529 for the 64GB iPad mini and $629 for the 64GB iPad Air. All of the models are available in silver, space gray, and gold and will be delivered starting March 29.

Today’s announcement comes ahead of a March 25 media event in Cupertino titled “It’s Show Time,” which is expected to host the debut of new Apple news and video services. Revealing new hardware ahead of that event suggests that Apple hopes to keep the focus largely on those services announcements and that the new hardware isn’t enough to merit keynote-style reveals. A recent rumor suggested that Apple will also reveal new iMacs this week ahead of the Show Time event.

Update at 12:44 p.m. Pacific: Early Geekbench benchmarks for one of the tablets show that the A12 is running at 2.49GHz with roughly 3GB of RAM, 1GB more than the entry-level iPad and 1GB less than the iPad Pro. The single-core score of 4806 and multi-core score of 11607 place it in the same league as Apple’s latest iPhones, which use the same A12 chip.