Months after the first details began to leak, eventually confirming virtually everything but its name, the iPhone 11 became official today at Apple’s annual September event, “by innovation only.” As expected, the new phone directly follows and replaces last year’s iPhone XR as the company’s mainstream model, leaving room for the iPhone XS and XS Max to be supplanted by two higher-end “Pro” devices.

From the outside, the iPhone 11 is a modest evolution of the iPhone XR, preserving the same 6.1-inch display size and “Liquid Retina” LCD technology. The front still sports a visible black notch and bezel for the 1792- by 828-pixel screen, all framed by anodized aluminum, with an improved front camera that includes a wider portrait mode and slo-mo selfie support. This year, the front- and bottom-mounted speakers are Dolby Atmos-certified for better audio spatialization.

The iPhone 11’s most obvious change is the addition of a dual-lensed rear camera system. Unlike the 2X zoom found in the iPhone X, iPhone XS, and Plus models since the iPhone 7 Plus in 2016, the dual camera can shift between “normal” 1X and “ultra-wide” 120-degree perspectives. A new Night photography mode automatically snaps and merges multiple images to bring details out in shadows at night time, while 4K60, extended dynamic range video can be shot across both cameras. There’s also a quick video feature that lets you begin shooting a fast video while snapping still photos. 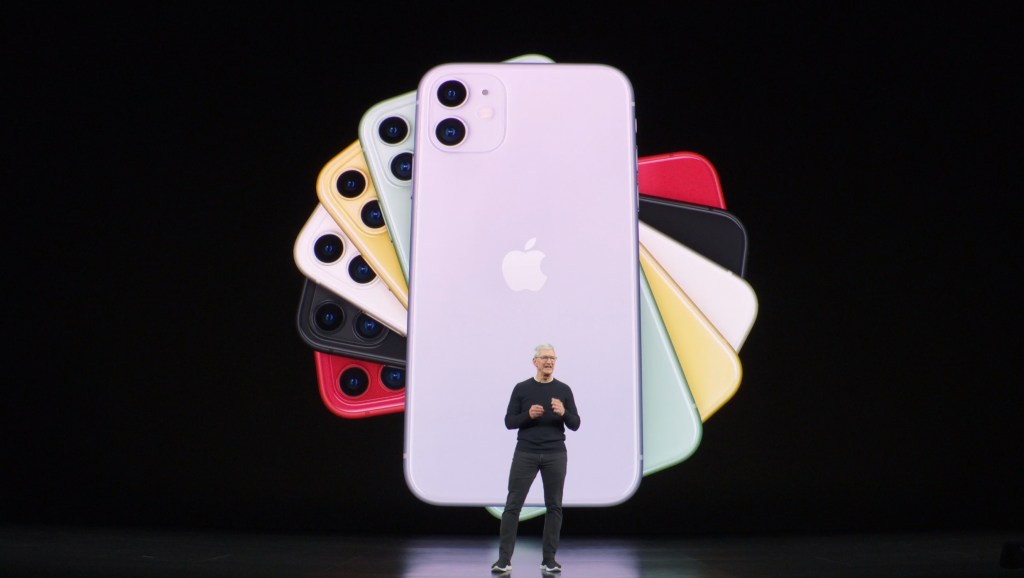 Apple has also tweaked the rear glass, updating the prior color lineup from black, white, yellow, red, blue, and coral to include light green, purple, and yellow options, along with white, black, and red. The housing is now waterproof to 2-meter depths for up to 30 minutes.

There’s a fully centered Apple logo and no “iPhone” branding, changes that were expected to simplify the rear design while providing a clear location for a new bidirectional wireless charging feature, which was originally expected to enable AirPods refueling and Qi recharging of the iPhone itself. However, the official product introduction made no mention of bidirectional charging; rumors shortly before the event suggested that the power efficiency wasn’t up to snuff with Apple’s standards.

Internally, last year’s A12 Bionic processor is being replaced by a newer, faster A13 Bionic. Apart from new AMX machine learning accelerators that promise six times faster matrix math computations, the performance isn’t leagues faster, Apple’s charts suggest, but still enough to keep the phone faster than any other mobile phone in both CPU and GPU power. Battery life is even longer than the iPhone XR, with an extra hour of run time, of course depending on the specific application.

On the wireless side, Apple is adding 2×2 MIMO/LAA Gigabit LTE wireless capabilities, better than last year’s iPhone XR but remaining a step below the iPhone 11 Pro, as well as 2×2 MIMO Wi-Fi 6 (802.11ax). As expected, the iPhone 11 omits 5G networking functionality, leaving Samsung and Qualcomm Snapdragon 855-based OEMs to dominate the market for high-speed cellular downloads until late next year. The device does have Bluetooth 5.0 rather than 5.1 support, now accompanied by a new “U1” Ultra-Wideband chip for more accurate motion and position tracking.