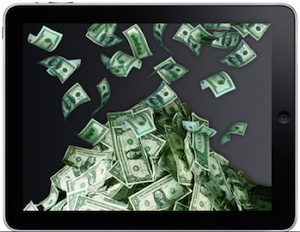 One of the criticisms leveled at Apple is that it sells its products to the fanboys and early adopters, not so much to a mass audience. The strong sales numbers reported in the company’s most recent earnings seem to refute that, and Chief Operating Officer Tim Cook argued that’s specifically untrue in the case of Apple’s new device, the iPad.

“It’s beyond an early adopter stage already,” Cook said. He didn’t offer many specifics to back that up, instead saying it’s based on “watching” who’s buying and using the devices. He called the uptake of the iPad by a general audience “the fastest that has happened in any product I know of or have ever been involved with.”

Sales of the iPad do seem to be beating analyst estimates, with 3.27 million sold by June 26, the end of the last fiscal quarter. That’s more than Apple expected — Cook said the company’s internal sales projections of 1 million iPads per month (the device launched on April 1) seemed “very bold.”

One sign that Cook may be right about the iPad’s broad appeal is the fact that the iPad is currently being tested for use within 50 percent of the Fortune 100 companies, which is not exactly an early adopter group.

Analysts also asked Cook about whether the iPad could have a “halo effect,” where people who buy iPads might then be inclined to buy other Apple devices like Macs or iPhones. That’s impossible to predict, he replied, but it did happen with iPods. And the company spends more time thinking about possible synergies between its products than whether the iPad might cannibalize sales of other devices like Macs, he added. And even if the iPad does cannibalize sales of higher-end devices, the Mac only has a small share of that market, and there are many more Windows PCs that it could be stealing an audience from.

“This is where it’s great to have a lower share,” Cook said. “If iPad cannibalizes PCs, I think it’s fantastic for us.”

Meanwhile, in the short-term, Apple is still struggling to meet the demand for both the iPad and the iPhone 4. Cook rejected speculation that Apple deliberately arranges for shortages to increase the hype, and he said the company is working as fast as it can to change the situation. He didn’t offer a specific timetable on when the shortages would end.

“We’re selling both of those products as fast as we can make them,” he said.

The fact that Apple can’t meet the current demand makes it hard to answer some of the analysts’ questions, like how large the total audience is for these devices, and also whether some potential iPhone 4 buyers have been turned off by complaints about the antenna.