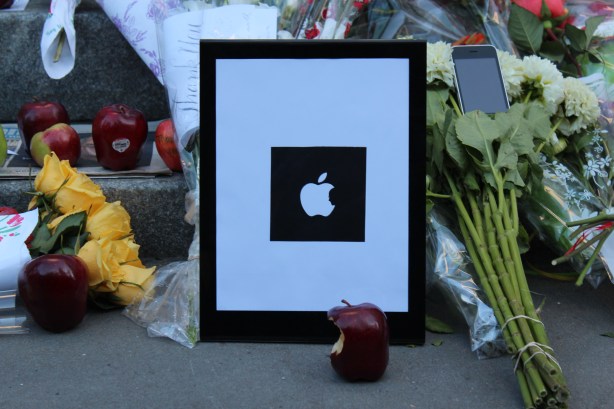 Apple fans are nowhere near done paying their respects to the man who arguably jump-started the smartphone revolution.

Dozens of fans are still gathering at the Apple retail store in New York City and across the country to pay their respects to Steve Jobs, the company’s former chief executive officer, who passed away on Wednesday at age 56. Some left notes, some left flowers, some left apples and personal messages. A security official on staff outside the Apple Store said that was the largest the crowd had grown to so far. When Jobs died, many also converged on Apple’s campus in Cupertino, Calif., and left flowers and tributes at Jobs’ house in Palo Alto, Calif.

Jobs was known as a visionary, creating products that he knew people would be fighting tooth and nail to get their hands on. They were products you didn’t even know you needed: the tablet market was basically non-existent before the introduction of the iPad, and the iPhone is now one of the most popular smartphones in the world and is an industry standard. Jobs arguably jump-started the smartphone revolution with the iPhone and its associated App Store. “It’s a phone, it’s an iPod, and it’s an Internet communicator — are you getting it yet?” he said on stage when he unveiled the iPhone.

President Barack Obama said perhaps Jobs’ greatest tribute to his success was that much of the world learned of his passing on a device he invented. It might be an even greater tribute that all the events honoring his life have been documented by those same tools. Many people present at the vigils were sending tweets, emailing, calling, taking photos or messaging friends — on their iPhones.

“There are few people who could build something so successful and so magical and do more than (Jobs,)” Reddit co-founder Alexis Ohanian told me. “It’s humbling as an entrepreneur, more than anything else, to see what he’s done.”