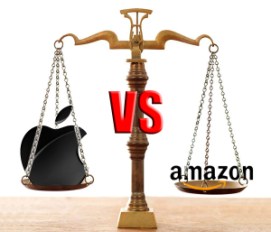 A ruling on Apple’s exclusive rights to the term “App Store” is due soon, and the outcome isn’t looking favorable for the Cupertino-based company.

Presiding U.S. District Judge Phyllis Hamilton told the court that she will “probably” deny Apple’s motion, according to a Bloomberg report.

The conflict started in March shortly after web retailer Amazon announced it was launching an app store of its own, imaginatively dubbed “Amazon Appstore for Android.” Shortly thereafter, a chagrined Apple — whose own “App Store” launched back in 2008 — filed a motion positing that Amazon’s move would cause customer confusion. Apple also argued that its considerable marketing push to brand the term made it more of a product than a genericized term.

Amazon eventually filed its own lengthy rebuttal with the court, admitting that Apple did not grant license or authorization to use the term. However, Amazon sought to exonerate itself because “no such license or authorization is required because “app store” is a generic term, and Amazon’s use of the term causes no likelihood of confusion, dilution, or unfair competition.”

Though there’s always the chance of a reversal between now and the ruling, Hamilton initially seems to side with Amazon. The judge’s statements in court yesterday were not only critical of Apple’s reportedly flimsy proof of customer confusion, but also that the hardware giant was not “likely not to prevail at this early juncture.”

It’s tough to say how this ruling could effect Apple. The company’s iOS devices are hits (many times over), and as persnickety and panicked as this lawsuit seems, Apple users still seem to be directing themselves to the correct “App Store.”