Amazon may beat Apple in bringing a wearable “smart ring” to market, but Apple has just successfully patented multiple iterations on the concept — a development that could disrupt the young market for finger-based smart accessories. Granted today, Apple’s patent has been in progress for at least three and a half years and reveals everything from multiple possible Apple ring designs to ring-specific charging solutions.

Like Amazon’s Echo Loop, which was revealed last month as a “Day 1 Edition” that will ship on an invitation-only basis to select customers, Apple’s patented smart ring isn’t a standalone device — it’s designed to wirelessly interact with and control another device using various input techniques, including voice commands and hand gestures. In a basic form, Apple’s ring could be moved through the air to trigger actions on a device, while more sophisticated versions would recognize voice commands with built-in microphones, and/or second-finger swipes on a tiny touch surface.

It’s obvious from the lengthy patent that Apple has been exhaustively working through the practical details of a ring-style wearable. The company suggests that its ring could have haptic feedback to convey directional information to the wearer; a dial control for physical input; and a motion sensor for recognizing handwriting, page-flipping, and twisting gestures. Using a biometric sensor for security, a sophisticated wireless system could unlock and wake up a sleeping device based on proximity, as well as conveying information about the wearer automatically to the device.

While the patent discusses numerous potential uses of the ring, ranging from drawing directly on the ring’s touchpad to gesturing at the external device — an Apple TV, a computer, iPhone, or tablet — many of these use cases appear to be awaiting the technology needed to become real. Apple suggests that the ring might contain a telephone module for making phone calls and that the touch surface could be either a pad or a small screen, though even the latest Apple Watch struggles with battery life when using similar features. 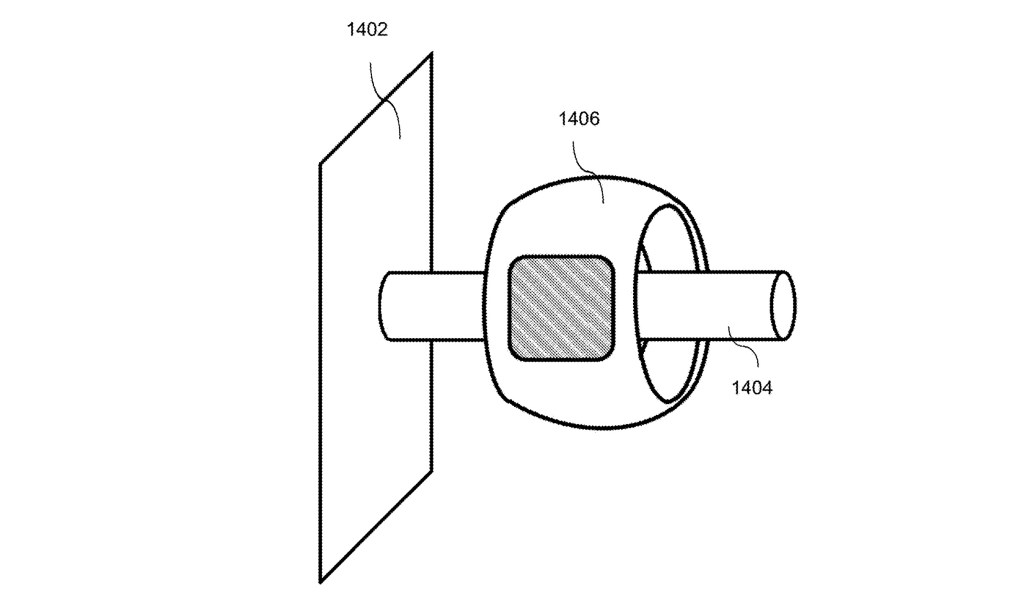 To that end, the patent discusses multiple interesting charging systems for the ring, including a power mat, a wireless charging stud or hook, a steering wheel-mounted wireless charger, and even chargers incorporated into objects such as a computer mouse. That Apple has even contemplated placing chargers where hands are normally used during the day hints at a need for midday or commute-time recharging of the wearable. Alternately, the company says there might be a multi-ring charger so that users can recharge more than one device at the same time — more likely aimed at a family or business with several rings than an individual with comic book villain-like control aspirations.

Unlike Amazon’s Echo Loop, which is expected to be on some paying customers’ hands by the end of this year, there’s no known ship date or other concrete details for Apple’s invention. But by successfully patenting the concepts, the company has drawn a line in the sand for competitors, subjecting infringing or arguably infringing concepts to the risk of a lawsuit — a possible but not certain deterrent.

Other companies are working on their own finger-based wearables. Microsoft filed last year for a pressure-sensitive smart ring patent, which has not yet been granted, and Origami Labs has shipped Orii, a ring that serves as a speaker and microphone for a smartphone. Amazon’s design offers similar audio functionality and can be used to evoke the Alexa digital assistant when your smartphone or Echo speaker are out of reach.

A year after reports that a TV-controlling iRing might be in the works, Apple filed a related patent application on April 1, 2014, exactly 38 years after the company’s founding. It then filed for what eventually became U.S. patent 10,444,834 one year later, on April 1, 2015. As it’s atypical for Apple to file for patents coinciding with its anniversaries, the dates could suggest some internal recognition of how far Apple has come over the years — from desktop to finger-based computers.