Apple’s App Store is creating twice as many newly minted $1 million publishers as Google Play in the U.S., according to a report by measurement firm Sensor Tower.

Sensor Tower’s Store Intelligence data reveals that more app publishers are achieving the important milestone on Apple’s App Store than on Google Play, based on an analysis of in-app revenues for developers who are hitting $1 million in revenue for the first time. This data tells you why Apple’s monetization leadership in the world’s second largest market for app spending is important. Not only are consumers spending more per device through its platform, but a greater number of up-and-coming publishers are reaping the financial rewards each year.

Nearly double the number of publishers made their first $1 million in annual revenue last year on the U.S. App Store compared to Google Play. In all, 66 publishers met or surpassed this benchmark figure on Apple’s store in 2016, which was 1.7 times more than the 39 that managed the same degree of success on Google’s platform. 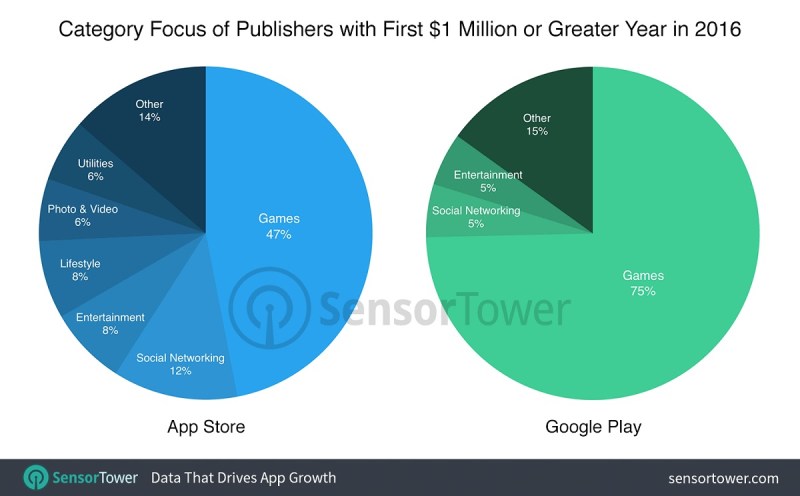 Above: Categories of publishers with first $1 million or greater year in 2016.

The number of publishers who had their first $1 million or greater year on the U.S. App Store in 2016 nearly doubled over 2015, when 34 surpassed that mark in terms of annual U.S. revenue.

While it still trails behind the App Store by this measure, Google Play grew its number of equivalent publishers on its U.S. store considerably more than Apple’s platform in 2016, by nearly 2.8 times from 14 in 2015. That is a promising statistic.

Sensor Tower also focused on which categories these app makers are focusing on. Games publishers accounted for the single largest category of first-time million-dollar earners across both platforms. But they were far more prominent on Google Play, where they constituted 75 percent of the total, compared to just 47 percent on the App Store. 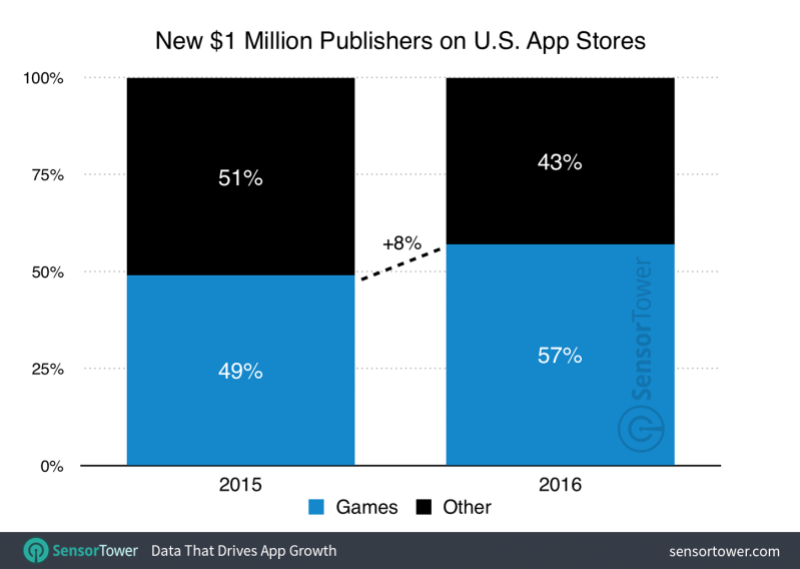 Above: Here is a chart showing the year-over-year change in the percentage of new $1 million publishers in the Games category.

The report also found that publishers also had their first million-dollar year across a more diverse set of categories on Apple’s store. Social Networking, Entertainment, Lifestyle, Photo & Video, and Utilities publishers accounted for more than 5 percent of the total on iOS. Dating app publishers made up seven of the 66 publishers that earned $1 million or more for the first time on the App Store last year, including the likes of Coffee Meets Bagel, Bumble, and Clover. Other standouts that exceeded this the milestone included teen-focused “chat stories” app Hooked and the fast-growing video sharing app Musical.ly.

On Google Play, only Social Networking and Entertainment publishers accounted for more than 5 percent of the total apart from Games. Google Play is showing positive momentum in terms of monetization, but given its substantially larger user base and download volume compared to its in-app revenue generation, it still has a considerable way to go before it’s on level footing with Apple’s ecosystem in the U.S. and worldwide.

Among the stand-out publishers on the App Store from 2016 are PokerStars (PokerStars Poker), Seven Pirates (Ark of War), and BitMango (Block! Hexa Puzzle). On Google Play, the stand-outs were Playdots (Two Dots), Zeptolab (King of Thieves), and Super Evil Megacorp (Vainglory).