In the U.S. and Canada, there is, essentially, only one tablet. Unless you count the various models of iPad.

It really isn’t even a competition: 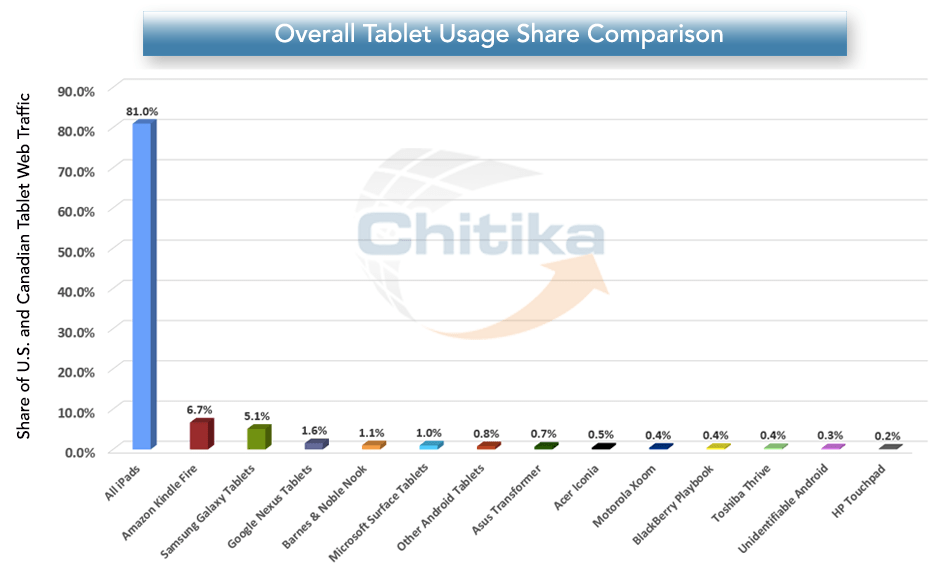 That’s precisely what Apple is trying to maintain today in its Apple event, where the company will almost certainly unveil a new iPad, a new iPad Mini, and probably a few more bright, shiny goodies for those of us in the tech world who care about inconsequential things like that.

More Android tablets are sold every quarter, but in terms of what people actually use, all iPads together account for about 81 percent of tablet usage in North America, according to ad network Chitika’s stats. The nearest competitor, Amazon’s Kindle Fire, hits a puny 6.7 percent, and it all goes downhill from there. Samsung’s biggest tablet effort, its Galaxy line, grabs just 5.1 percent, and Google’s Nexus is down in the single-digit wilderness, at 1.6 percent.

iPad, clearly, is four times as dominant in actual consumer use as all other tablets combined.

The 81 percent is down slightly from 82.4 percent this summer, but not significantly. And if Apple can pull a few rabbits out of its hat today, it’s possible these numbers will even increase.

The data in this report is from “tens of millions of U.S. and Canadian tablet online ad impressions running through the Chitika Ad Network” from September 15 – 21, the company says. Interestingly, while it’s still tiny at one percent, Microsoft tablets doubled their share from June to September 2013.