Apple’s iPhone 5 is 2.5 times faster at responding to touches than Google Android devices, according to a benchmark test by game and app streaming firm Agawi.

The results confirm what users believe about the devices, and they highlight a feature that is usually left out of technical comparisons.

In its first TouchMarks benchmark test, the iPhone 5 responded to touches at an average time of 55 milliseconds, compared to 85 milliseconds for the iPhone 4. The closest Android device was the Samsung Galaxy S4 at 114 milliseconds.

“Apple trounced the competition,” said Peter Relan, chairman of Agawi. “There is this whole other dimension of responsiveness that Agawi cares about.”

Agawi studied the iPhone 5 and compared it to Android touchscreen smartphones such as the Google MotoX, the HTC One, and the Samsung Galaxy S4. It also compared results for the Nokia Lumia 928 on Windows Phone, which came in at 117 milliseconds. The company started doing the tests as part of its work in delivering Flash-based Facebook games and other apps as interactive streams to iOS devices.

“Even a two-year old iPhone 4 beat out the other Android devices,” Relan said. “You expect this from Apple’s design team, while others may view their responsiveness as good enough. Now we know why the Android touch keyboard is not as snappy.”

Agawi is making the benchmark and methodology available on its web site. Agawi’s AppGlimpse division plans to measure other phones in the future, including the upcoming iPhone 5S and iPhone 5C. It will also measure response times for games, tablets, and apps streamed from the cloud.

“App responsiveness is judged by how quickly the app can respond to your inputs,” said Rohan Relan, cofounder and CEO of Agawi. “Smartphones with touchscreens that have lower MART scores feel snappier. This is probably why, to many users, the iPhone keyboard feels more responsive than an Android phone keyboard.” 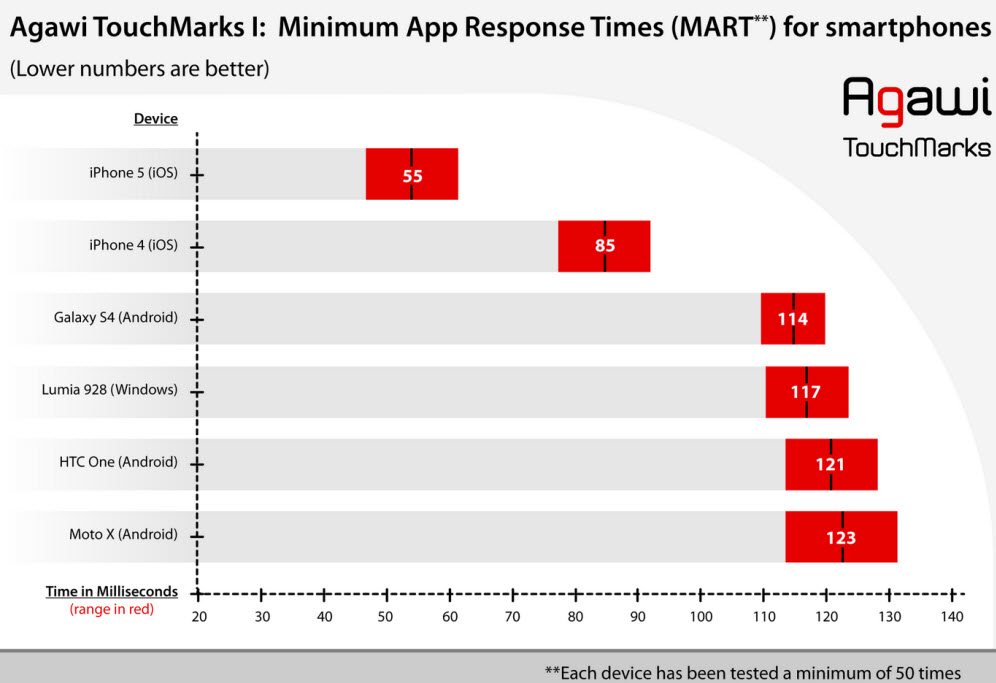