Shortly after Spotify revealed it was filing an antitrust complaint against Apple in Europe, the Cupertino company responded with a point-by-point rebuttal.

But a look at Apple’s carefully crafted counterarguments reveals that it diligently ignored one of Spotify’s key areas of concern: Apple Music.

By way of a brief recap, Spotify’s frustration with Apple’s business practices goes back years. The music-streaming company’s complaints have historically centered around the way Apple controls its platform (iOS) and the App Store — through which Apple started charging 30 percent commission (or “tax,” as Spotify calls it) on all in-app purchases in 2011. As a result, Spotify stopped selling premium subscriptions through Apple’s billing system. But in 2014, Spotify gave in to Apple’s “constant pressure” and began selling subscriptions through iOS at a rate inflated to offset Apple’s fees. In 2016, Apple lowered its commission on all apps to 15 percent after the first year of a subscription, though that very same year Spotify once again removed its premium option from the iOS app.

In his complaint this week, Spotify cofounder and CEO Daniel Ek fired a bunch of additional accusations at Apple, pointing to such grievances as blocked app updates and curtailed integrations with Siri and Apple Watch. Weighing Apple’s official responses to these grievances, you pretty much end up in a he said, she said situation. But one thing that tips the balance in Spotify’s favor is Apple’s refusal to address the elephant in the room.

Apple launched Apple Music as a Spotify competitor back in 2015. Since that time, Apple Music has made some headway against its rival, garnering a global market share of around 20 percent, though it still lags far behind Spotify’s more than 35 percent. But popularity aside, Spotify argues that Apple gives itself an unfair advantage on iOS by charging third-party services such as Spotify a commission while Apple Music obviously pays nothing. This is the main reason Apple’s 1,000-word rebuttal does not stand up — it makes next to no reference to Apple Music’s clear advantage over Spotify on a platform Apple controls.

Apple actually does make a slight reference to the situation, but only indirectly:

We want more app businesses to thrive — including the ones that compete with some aspect of our business, because they drive us to be better.

But that is as far as Apple goes in terms of addressing what is probably the strongest argument in Spotify’s complaint. Indeed, the European Commission likely won’t take Spotify’s complaint far on minor grievances such as Apple playing hardball over app updates. But it will almost certainly investigate the clear conflicts of interest involved in Apple effectively forcing competitors to charge more for their services.

Apple also ignores another key part of Spotify’s complaint, which targets the way the company prevents third-party developers from communicating to iOS users how they can upgrade to a premium account through other channels. Anyone who downloads the Spotify app on Apple’s platform will see options to “sign up for free” or “log in,” but there is no option to sign up for a premium subscription or even to begin a free trial. 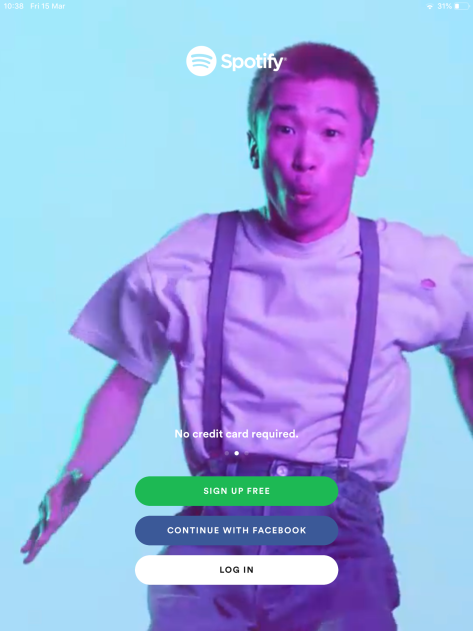 Above: Spotify on iPad: How to I get a premium subscription?

The closest Spotify’s iOS app comes is this little tidbit from the App Store notes, which omits any information about how a user could go about getting a premium subscription.

Stream free with ads or subscribe to Premium to go ad-free and download music to play when you’re offline.

This is another area that could undermine Apple’s position from a European regulatory standpoint, which is likely why it wasn’t addressed in the rebuttal.

To be clear, Spotify is no innocent — it has engaged in many questionable practices regarding its royalty structure. And as Apple gleefully points out, just this week Spotify, Amazon, Google, and Pandora decided to appeal a decision by the U.S. Copyright Royalty Board that would increase payouts to artists by 44 percent. Apple, for what its worth, chose not to appeal.

However, in ignoring one of Spotify’s core antitrust complaints in its otherwise detailed rebuttal, Apple seems to concede a key point to its Swedish rival.