All of a sudden, Android is no longer the only flexible mobile operating system on the market.

With iOS 8, announced at Apple’s WWDC keynote on Monday, the iPhone maker has made great strides towards opening up its platform. Now your apps can actually exchange data with each other. Third-party apps can take advantage of TouchID, the fingerprint recognition feature in the iPhone 5S.

Heck, you’ll even be able to replace your iPhone’s keyboard with a third-party alternative such as Swype or Swiftkey. That sort of flexibility and customization is something only Android users have been able to enjoy in the past.

Coupled with the new iPhones, which are rumored to have bigger screens and should be announced later this year, Apple is clearly targeting many of the capabilities that have historically driven consumers to Android.

So what can Google do now? At this point, it seriously needs to double down on features that will keep Android users from jumping ship. Most of those will likely rely on the company’s core services, like ubiquitous Google Now integration. Additionally, Google needs to step up the security and stability of Android, so it it feels just as solid to developers as iOS.

Android isn’t in any danger of losing its spot as the biggest mobile OS, but Google also can’t just sit back and let Apple steal away its customers. 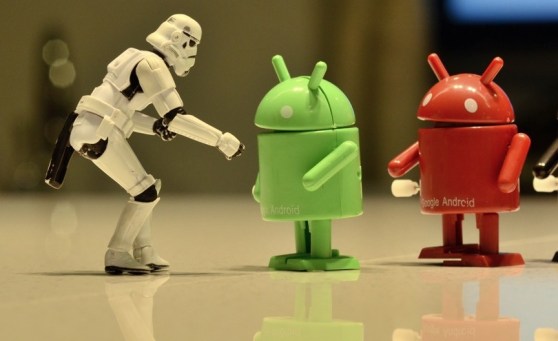 Above: Android fighting off evil

In the battle between iOS and Android we’re basically seeing history repeat itself. iOS has always been relatively secure and stable, just like Apple’s Mac OS over the past few decades.

Android, meanwhile, has found success by opening itself up more to third-party developers and a wide variety of hardware, just like Windows. (And if we went way back, you can view Google’s approach to Android similar to how Microsoft “borrowed” the graphical user interface in Windows.)

Judging from what I’ve seen of iOS 8, Apple has now reached a point where it can finally offer flexibility similar to Android while keeping iOS secure.

But Apple has also developed a way to let its mobile OS and desktop OS seamlessly work together. Apple’s new “Continuity” features lets you move a document you’re working on from your Mac to your iPhone, or take a call on your Mac even when your iPhone is in another room. It’s simple and ingenious.

Continuity is also a killer way for Apple to keep you locked into its ecosystem. Once you get an iPhone or iPad, there are plenty of reasons to justify getting a new Mac as well (or vice-versa).

Google isn’t just in danger of losing mobile customers to Apple — it could potentially lose users of its existing services.

And, perhaps most troubling for Google: If it can’t come up with new killer features for Android, Apple’s ever-expanding ecosystem could steal potential customers away from services Google hasn’t even launched yet.