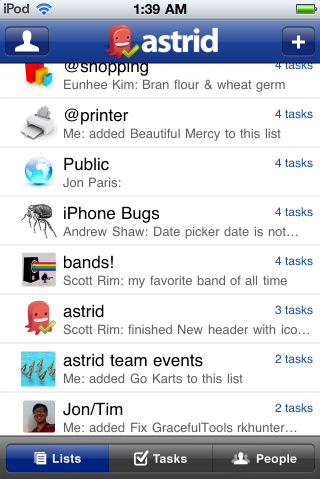 Astrid, an Android app that aims to reshape task management, announced today that it has received seed funding from Google Ventures and Nexus Partners.

And to top off the good news, the company, an alum of startup incubator AngelPad, also said that iPhone and Web versions are on the way as well.

In an interview with VentureBeat last week, Astrid CEO Jon Paris said he’s noticed that many productivity apps aren’t very social. Along with co-founder and CTO Tim Su, Paris said he aimed to fix that with Astrid. The app allows you to share tasks with your friends, which gives them an added bit of societal pressure that’s potentially more compelling than a typical task reminder. And in an interesting twist, Paris also noticed that friends would occasionally help him out with tasks if they saw he was overloaded.

Paris tells me that Astrid has received over 2 million downloads on Android (1.5 million since last July), with 24 million completed tasks. The app competes with services like Remember the Milk (which Astrid used to synchronize with), and Apple’s upcoming Tasks app in iOS 5. Astrid has also recently added location-based reminders (a feature coming up in Apple’s Tasks app) and the ability to synchronize with Google Tasks.

Astrid’s funding was also brought up today during a fireside chat with Google Ventures partner Rich Miner at our MobileBeat 2011 conference in San Francisco.