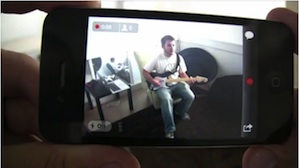 Once it became technically possible, live broadcasting from your phone seemed like an inevitable next step for video startups, since it frees them from complicated camera setups (like the Ustream rig I lugged around at the Consumer Electronics Show in January) or the computer webcams that most people use. Michael Siebel, chief executive of San Francisco-based Justin.tv, said mobile broadcasting should dramatically expand the livestreaming audience. The Android application is already catching on fast, with 20 percent of Justin.tv’s broadcasters using it within the first two weeks. That should only grow with time and the release of the iPhone app.

I stopped by the Justin.tv office last month to get a preview of both apps. It seemed like the team had taken a lot of care to build a video experience that was simple to use while also incorporating plenty of features and interactivity. That’s particularly important for grabbing new users, since there are already livestreaming iPhone apps on the market. Justin.tv said that unlike competitors Ustream and Qik, its application can use the iPhone 4’s front-facing camera, allows users to control the phone’s camera flash, hardware-encodes the video, and allows broadcasters to chat with their viewers from within the app.

Justin.tv also said it has a higher frame rate than competing apps, as you can see at the end of the demo video below — that avoids the stuttering, slideshow-quality footage that you see in some videos. I haven’t experimented with the app too much, but the video quality I saw in my demo seemed to match the quality in the video below.

The company is backed by Alsop Louie Partners, Tim Draper, and incubator Y Combinator. You can download the new iPhone app here.