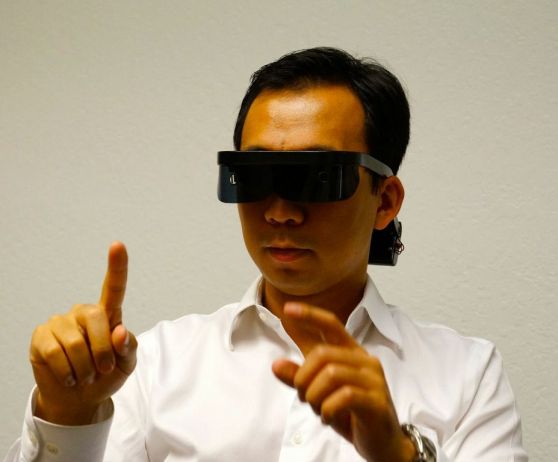 RANCHO PALOS VERDES, Calif. — Google Glass is nice, but its display cards are so two-dimensional. Atheer Labs adds an extra dimension with a head-mounted 3D display that can help you layer a virtual world on top of the real one.

It’s considerably more bulky and obvious than Google Glass, but to be fair, Atheer’s head-mounted headset is not intended as a product, yet. Instead, this is a demonstration of the company’s technology.

“This year we’re very focused on partnerships and developers,” said co-founder Soulaiman Itani, onstage today at D11, a technology conference put on by All Things Digital.

During the demo, founder Allen Yang stood onstage wearing the headset (pictured above) while controlling a display by moving his head around to scroll, selecting objects by moving his hands in front of him, and making digital displays appear or disappear alongside the real-world scene in front of him.

For example, the device displayed a globe, which Yang was able to turn or zoom in on with fingertip gestures. From his point of view, the globe appeared in full three dimensions, floating in space in the world around him, but for the members of the audience it was simply a 2D display on a big screen next to him.

Atheer is in product development and is looking for developers to build apps for its platform. It currently works with Android apps in 2D, but could be modified to work with any operating system, the company says. Atheer will also be conducting technology demonstrations throughout summer 2013, the company stated. Interested developers can visit http://atheerlabs.com/devs for more information.