Connected cars are the rage. And the car of the future could have a curved central display with a huge amount of real estate for giving drivers information, according to display chip maker Atmel.

The San Jose, Calif.-based company is showing off its latest AvantCar 2.0 concept for car touchscreen displays at the 2015 International CES, the big tech trade show this week in Las Vegas. Atmel introduced the concept a year ago, and it takes advantage of Atmel’s chip technologies.

“The idea is to show car makers and suppliers what we’re capable of doing in a system,” Paul Kopp, director of automotive for Atmel, told VentureBeat.

The screen looks a lot different from today’s cars because it has no mechanical knobs or buttons. Don’t expect to see this exactly the way it appears here in cars soon. Atmel sees AvantCar 2.0 as an idea for product designers, but it is interesting to note how different the design is from last year’s concept.

“The last one wasn’t as tailored to automotive standards for display quality,” said Kopp. “It also has curved liquid crystal displays (LCDs) that weren’t available before. It will look more like a curved surface. The designers really want that in automotive now. The lines will blend more with the vehicle itself.”

In a vehicle, the display will likely be relatively large. The average is about 8 inches diagonal now, but that could head toward 10 inches or 12 inches in the future, Kopp said.

“When Tesla came out with a 17-inch main screen, that woke up a lot of the American manufacturers to the idea of bigger displays in the car,” Kopp said. “The right size for the user? The jury is still out.”

Some displays are necessary since the U.S. government has now mandated backup cameras for cars as a safety feature. Since car makers are already including a screen for that purpose, they can repurpose it for other applications as well. Kopp thinks there will be one large display in the central radio console area, as well as displays where the gauges are.

The screen uses Atmel’s XSense Flexible Touch Sensor, next-generation human-machine interfaces, and MaxTouch touchscreen controllers. The touchscreen is more crisp this year, and it is more responsive than last year’s model since it uses glass displays.

Some car makers have been using haptics, or electronic touch feedback, for controls. But Kopp said that the trend has shifted toward larger screens and easier touch technology.

The technology in the console display could handle jobs such as car access, car networking, audio streaming via Internet connectivity, and authentication.

You can connect a mobile device to the display via Silicon Image’s MHL (Mobile High-Definition Link) solution — a technology that allows users to easily transmit content from a smartphone, tablet, or other mobile device to larger displays such as in-dash automotive displays, while charging the mobile device. 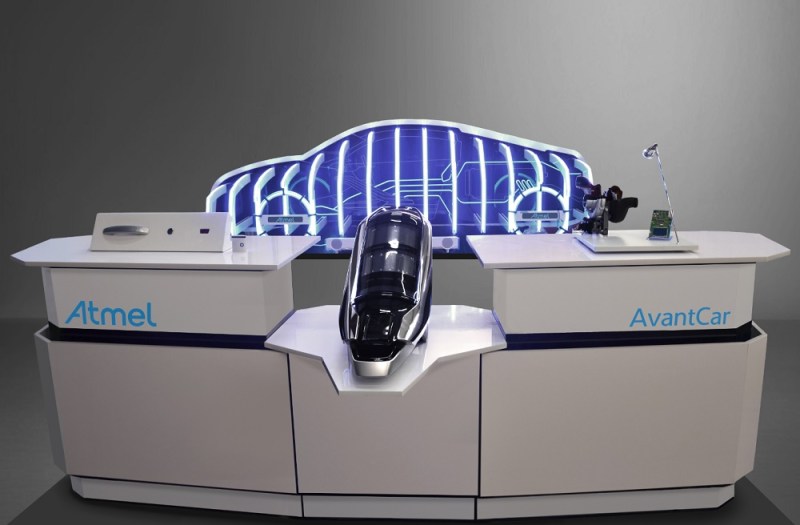