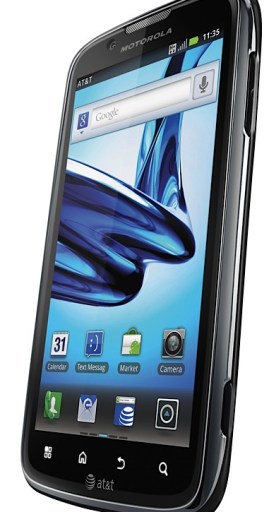 AT&T‘s family of Android phones is getting crowded. The company has launch five new Android devices, including the sequel to a phone released just this year, the Motorola Atrix 2.

The new phones add some much-needed variety to AT&T’s smartphone lineup. But it’s hard not to notice that, aside from the Atrix 2, there’s very little to get excited about with these new releases, announced at the CTIA conference today in San Diego.

By all appearances, the Atrix 2 is a very minor upgrade over its predecessor, which was one of our favorite devices from the Consumer Electronics Show earlier this year. It features a slightly bigger screen at 4.3-inches (versus 4-inches), a higher-quality 8 megapixel camera, as well as the added ability to record 1080p high-definition video. But just like the original, the Atrix 2 also runs a 1-gigahertz dual core CPU (though it may be a newer-generation chip). You can also connect the Atrix 2 to Motorola’s LapDock, turning it into a netbook of sorts.

AT&T also announced the Samsung Glide, which sports a 4-inch screen and a slide-out hardware keyboard, as well as the Samsung DoubleTime, whose most notable feature is its dual touch screens. The DoubleTime is clearly aimed at mainstream users with its slower 600 MHz CPU and small 3.2-inch displays.

On the far-less-desirable end is the Pantech Pocket, which also features a 4-inch screen and a hardware keyboard, but sadly seems to have been cursed with an ugly design.

For its pre-paid lineup, AT&T is announcing the Avail, a low-end device built by ZTE. The Avail includes a 3.5-inch screen and 5-megapixel camera, which honestly isn’t too shabby for a pre-paid device.