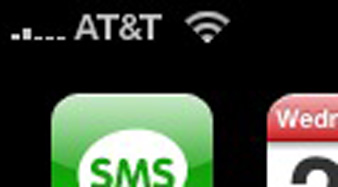 The cruelest, truest moment in iPhone: The Music Video is when New York Times gadget guru David Pogue sings, “So what if it’s AT&T?” A bit of audio doctoring mangled Pogue’s “AT&T” in sputtering mimicry of a bad connection. My own AT&T iPhone fails to connect in many areas where my Verizon Wireless BlackBerry never hiccups.

AT&T needs to change that reputation. That’s one reason the company has pre-announced its rollout of a faster wireless network that most customers won’t have until 2011.

Skip the industry jargon in AT&T’s press release to get to the payoff:

The upgraded network platform could allow for theoretical peak speeds of 7.2Mbps.

The company has committed at least $17 billion in capital expenditures this year to pay for the upgrades. Strip away the legalese and PR-speak from the announcement, and you find the jargony details on AT&T’s specific plans to make Pogue finally happy: