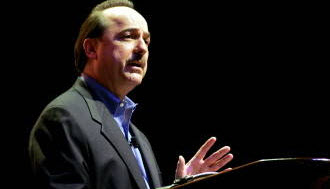 AT&T President Ralph De La Vega assured AllThingsDigital in an interview that its $39 billion acquisition of T-Mobile makes a lot of sense. Of course he’s going to say that.

This deal is likely to face a lot of legal and consumer opposition, so it’s important for AT&T and T-Mobile to sell it well from the outset.

De La Vega said the deal will alleviate one of the problems that both companies faced: the impending exhaustion of available wireless spectrum. The spectrum owned by both companies is complementary. He also said that merging two similar networks will create more network capacity as the density of the network grid increases.

In major urban areas, De La Vega said that a combination of two networks will create more cell phone sites per grid, which raises the capacity in the network and improves the quality. You won’t get as many dropped calls in San Francisco, New York or Washington D.C.

De La Vega said the deal ensures the deployment of a robust 4G LTE network across 95 percent of the U.S. population — something neither company could do on its own. T-Mobile didn’t have a clear path to LTE, so its 34 million customers now can take advantage of AT&T’s LTE network. AT&T says it will now be able to deliver LTE to more customers, including those in rural areas.

“I think that the appropriate authorities will find there will still be plenty of competition left,” he said. He also repeated a claim that wireless service prices have fallen 50 percent since 1999, even with five major mergers.

Asked if AT&T will get bogged down in integration of T-Mobile, De La Vega said he had been through this before with the integration of AT&T Wireless and Cingular Wireless. In that merger, he said that the churn rate among users dropped by half within three years and margins improved.

T-Mobile said the acquisition is expected to be approved within 12 months. Regarding the iPhone, T-Mobile said only it doesn’t offer it but offers cutting-edge devices of its own. It also said that all contracted plans that are entered into before the ownership will be honored. It also says it will continue to operate its network and handle its own bills.