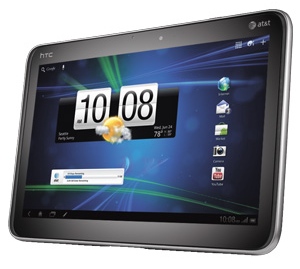 AT&T is having a bad day thanks to the U.S. government’s decision to try and stop its much-talked-about T-Mobile acquisition. But that didn’t stop AT&T from releasing details on its next tablet offering, the 10.1-inch HTC Jetstream tablet with Android Honeycomb.

Google’s Android tablets have collectively wrestled away 20 percent of the media-based tablet market from the mega-popular Apple iPad, due in part to a wide-range of Android models and prices. The Jetstream will add to those numbers on its Sept. 4 release date as Android tablets continue to try and make a dent in the iPad’s strong lead.

In terms of hardware specs, the 10.1-inch Jetstream is packed. The tablet’s standout features are HSPA+ and LTE 4G connectivity, which will get users online in a jiffy. It also has a 1.5GHz dual-core Snapdragon processor, an 8-megapixel camera on the back with 1080p video recording and a front-facing 1.3-megapixel camera for video calling.

In the past, AT&T said it planned to launch LTE 4G in five cities this summer. With summer coming to an end, the company will need to formally launch its 4G network soon if it want. AT&T is already far behind Verizon, which launched its 4G network late last year and has been turned on in more than 70 metropolitan areas in the U.S.

The most shocking element of the Jetstream is that AT&T is charging $700 upfront with a new two-year contract. Even with all the technology that’s packed inside, consumers have shown a reluctance to pay top dollar for Android tablets. With the added expense of the expensive two-year contract, it’s hard to imagine many people eagerly purchasing this device.

What do you think of the new HTC Jetstream tablet? Is the price too high?